I’ve gotta be honest: I had a hell of a time coming up with today’s stamping manicure. Not only was I having some serious mani inspiration block, but my camera was giving me a lot of problems and wouldn’t focus. The only way I could get it to focus was to change my hand position which is why today you will see a different angle. Things just weren’t working out for me! When I started thinking about what I wanted to do, I remembered how much I love Butter London Wallis so that is where my mani started. Let’s take a look at this gorgeous polish. 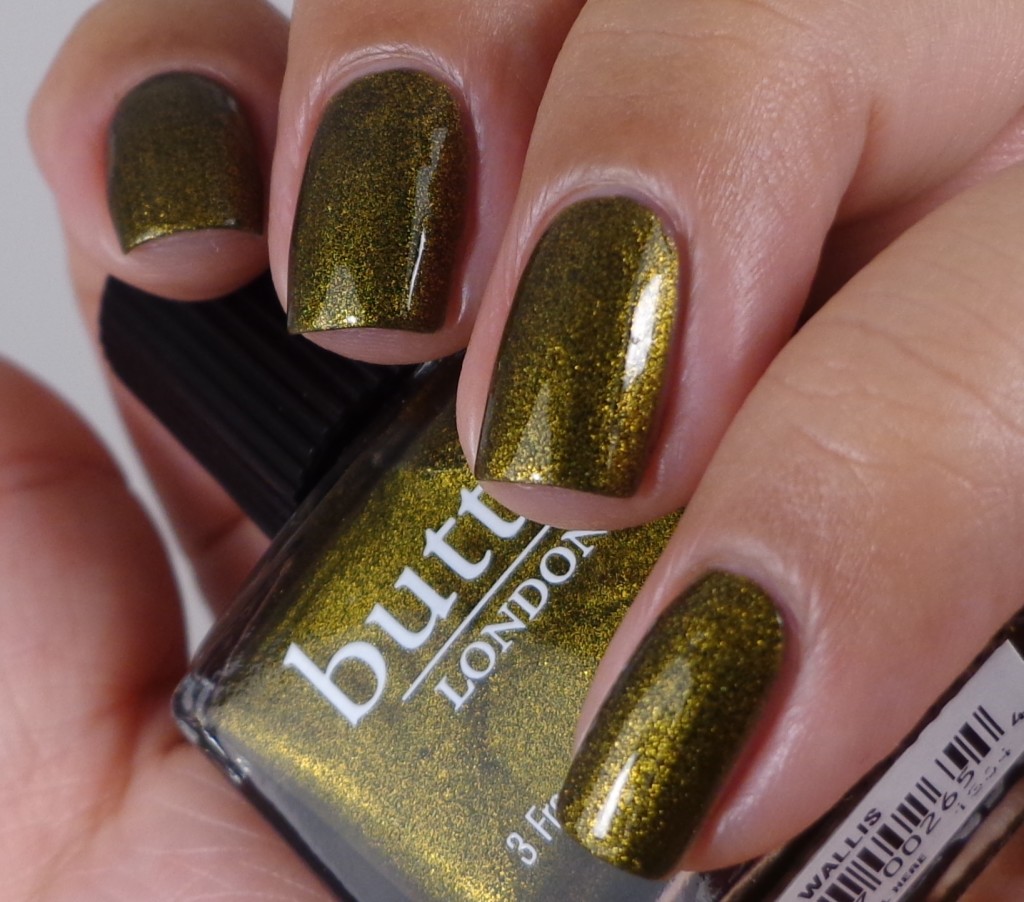 Butter London Wallis is like a perfect combination of gold and green and just looks incredibly rich. A metallic olive gold you say? Yep, perfect description. Here I top coated it with Seche to give it a nice shine. 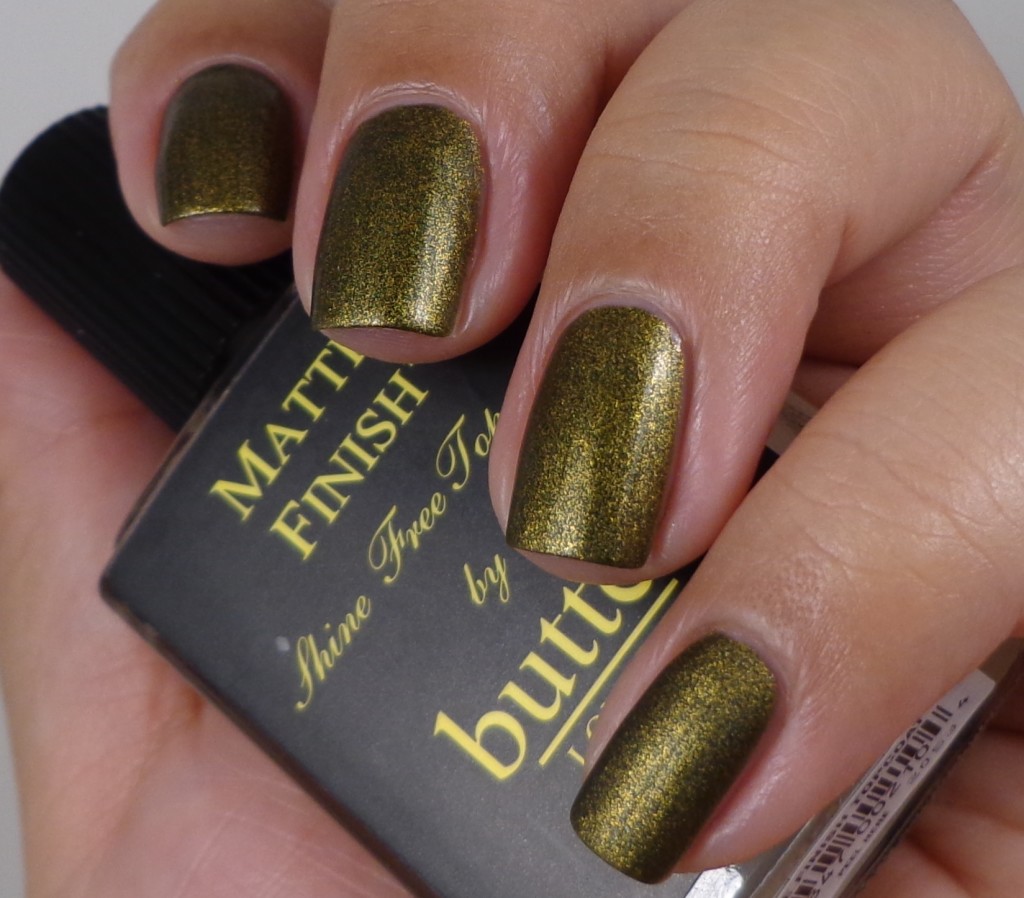 And here I applied a matte top coat over it. Doesn’t it look even more amazing? 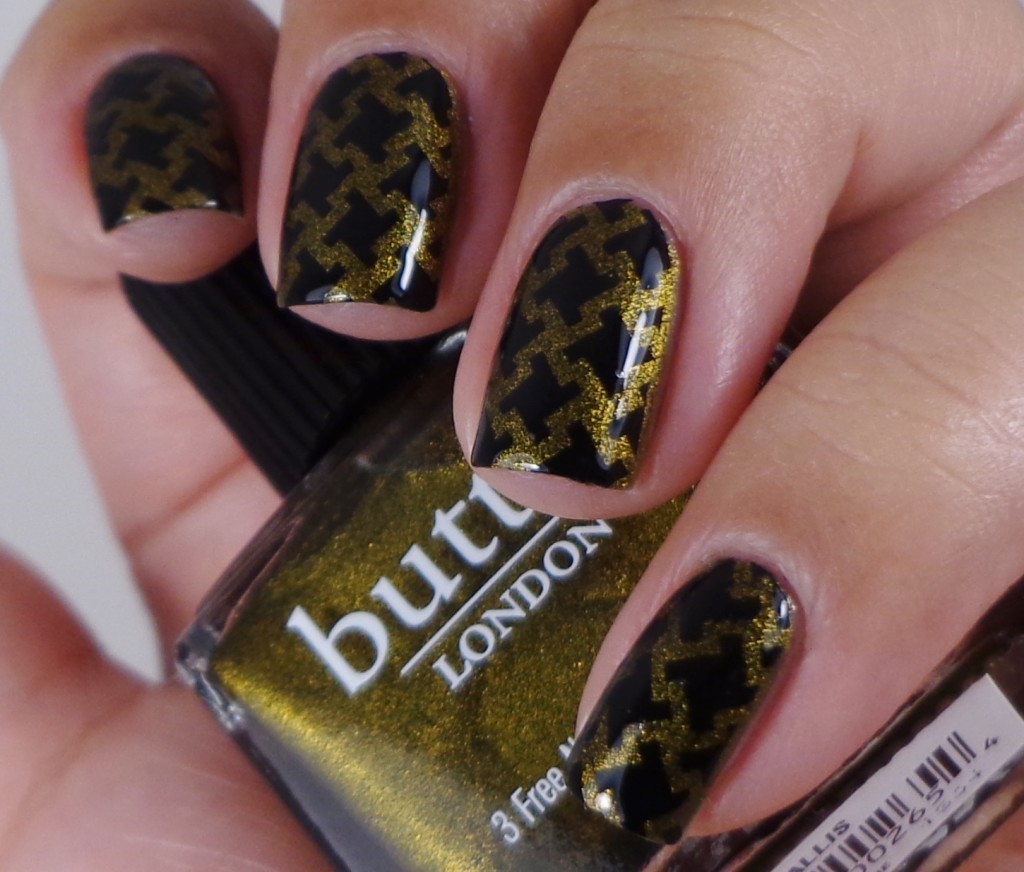 I the picked a design from Bundle Monster plate BM-319 and stamped it with my black special polish. I initially wanted to mattify the whole design, but it just didn’t look as great because there wasn’t that much of a contrast. I much prefer this as a shiny manicure.

So what do you think of this mani? I’ve gotten a lot of questions about stamping and what I use and how, so I was thinking about maybe doing some sort of tutorial? There are a lot of tutorials out there so I don’t want it to just be boring and/or redundant. Would you guys be interested in this? Don’t forget to check out the other Stamping Saturdays manis from the other participants. Thanks so much for the visit today, and I hope you enjoy your weekend.

I was super excited this morning because I landed an interview for tomorrow morning and then I got called back to see if I could come in on Monday instead. WAH WAH WAH!!!

I swear that I heard that noise in my head when I got that call. Sometimes I think that my life truly has a soundtrack and, sadly, most of the sounds can be found on Looney Toons Cartoons. Anyway, I am glad they called to reschedule and not cancel so now I just have to wait until Monday. I was already planning out my outfit–black suit, cream colored blouse and some “sensible” black pumps. Oh my God I am a grown up!!!!!!!! I was also trying to decided what to do with my nails. I was vacillating between a french manicure or Butter London All Hail The Queen but since the interview got rescheduled, I decided to do something a little more interesting today. I was already looking through my Butter Londons so I decided to use Wallis. 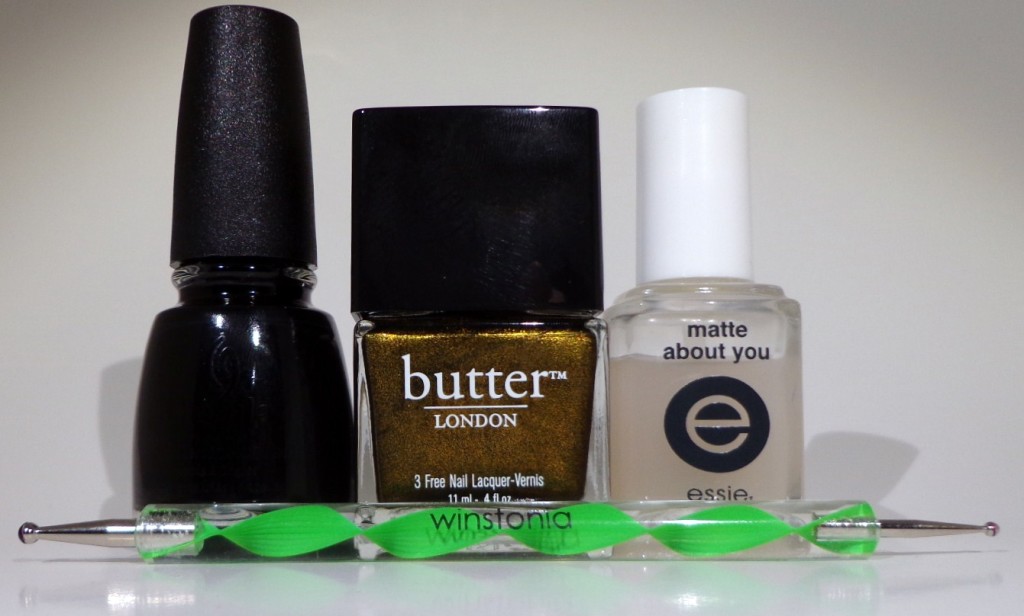 I knew I wanted to do some dots and also mattify everything so I took at out polishes and tools that I would need: Butter London Wallis, China Glaze Liquid Leather, Essie Matte About You and a dotting tool. 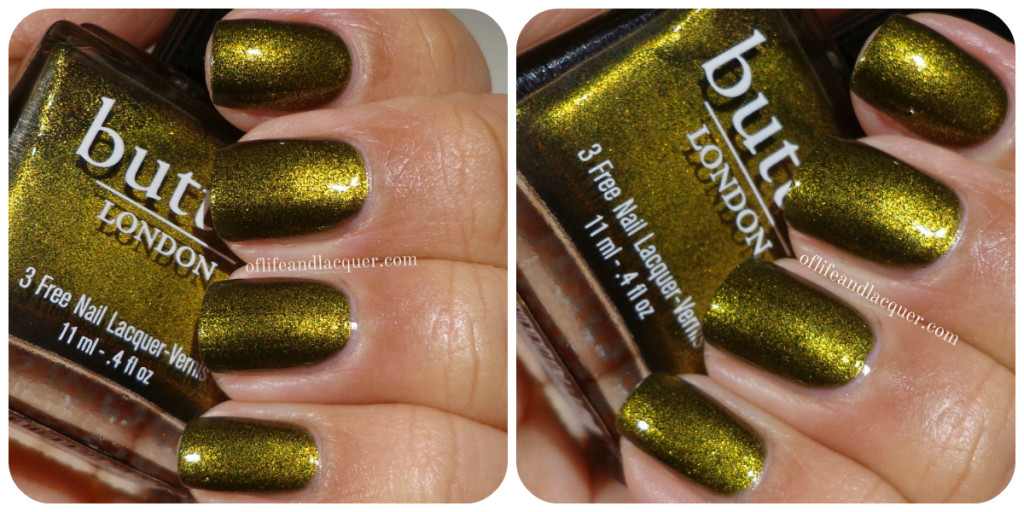 When I first bought Butter London Wallis, I honestly thought that it was kind of ugly: one of those polishes I wouldn’t buy from looking at it in the bottle unless it was on super sale.  I love this brand so I decided to give it a chance because that’s what polish hoarders do. This polish is pretty darn pigmented and easy to apply so all I needed was two coats. 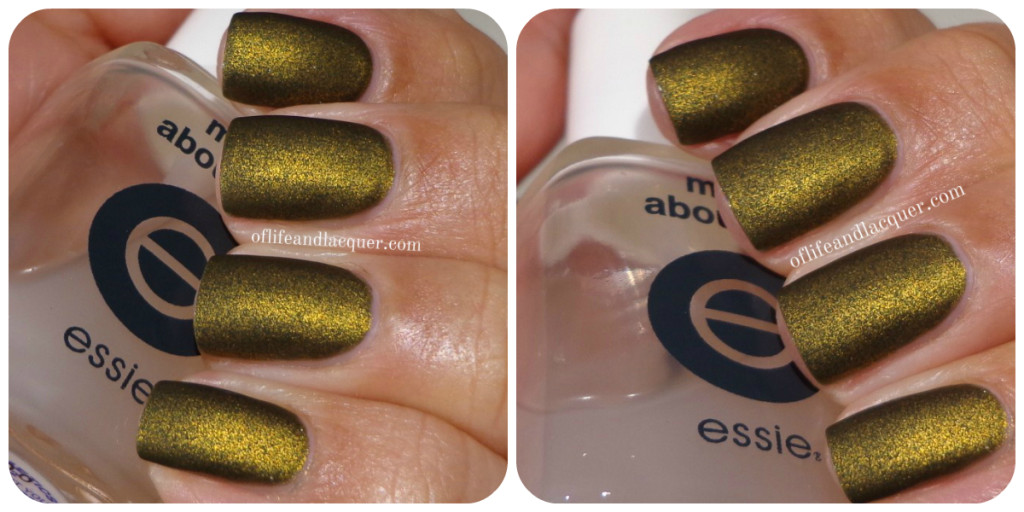 I can’t remember where I first saw Wallis mattified, but I fell in love with it. Look at it!!! It has this amazing depth to it and the color changes and looks almost velvety. I have a few mattifying top coats that I rotate but they all pretty much work the same. If you’re looking for an inexpensive matte top coat, I recommend NYC Matte Me Crazy which can be purchased for $2–can’t beat that price! 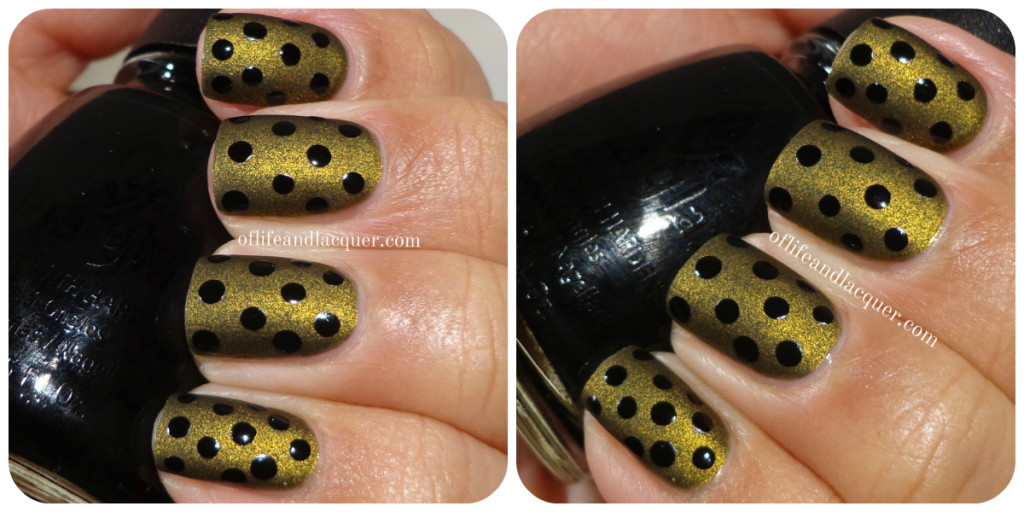 Can you tell that I love dots? I am really diggin’ this dotticure. I thought about mattifying the whole thing but I ended up liking the contrast of the shiny black dots. There is seriously no easier way to spruce up a manicure than to bust out a dotting tool.

While I was editing this post, I was also talking to Nicole on twitter and I told her that I was going to make an egg and chorizo burrito. We then proceeded to have a conversation about what kind of chorizo to use and how to prepare it. Nicole likes to say that she’s Mexican on the inside…I guess I can let her keep that honorary title since she did try to use the word “carniceria” nonchalantly during our conversation. You may thank Nicole for the following… 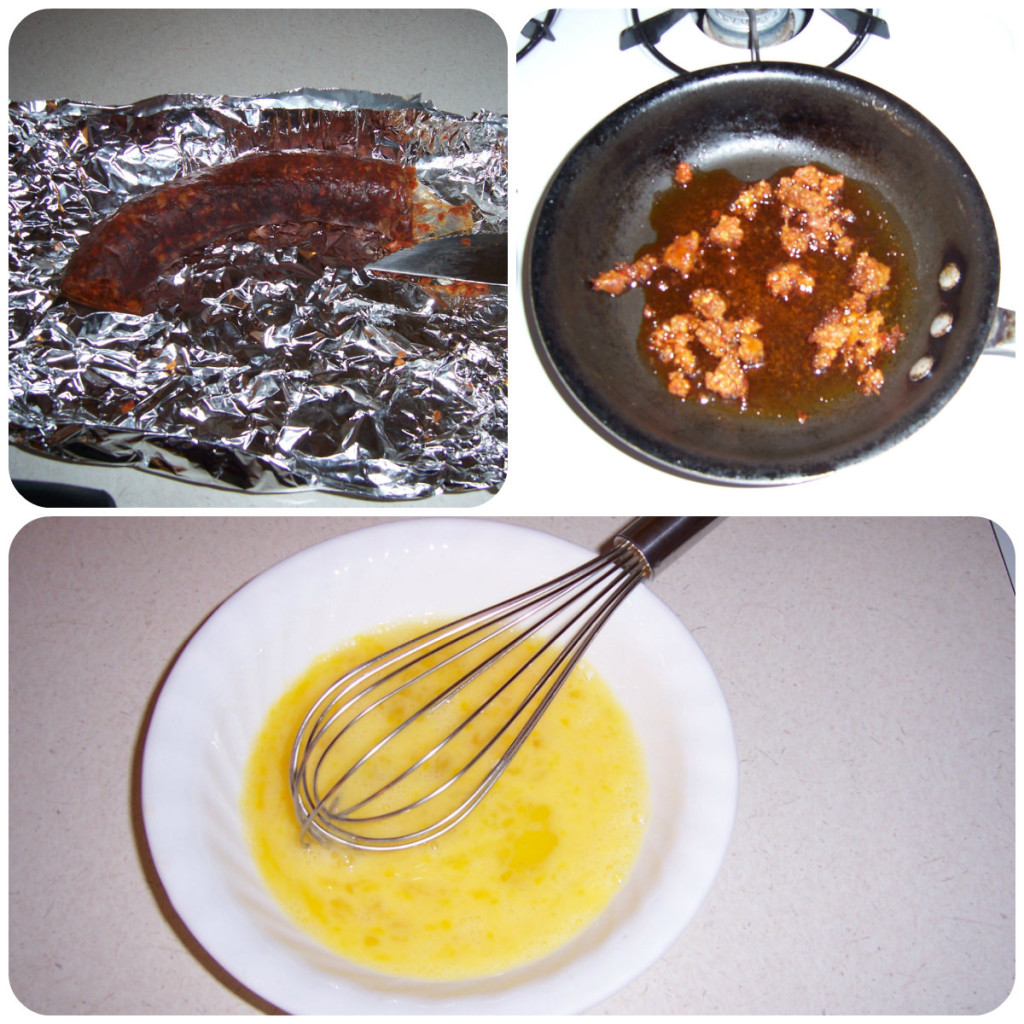 Crumble some chorizo and cook it in a skillet. This is my special omelette skillet! You should drain some of the fat that the chorizo releases because it’s A LOT. I use 1 egg yolk and 3 egg whites and scramble them. 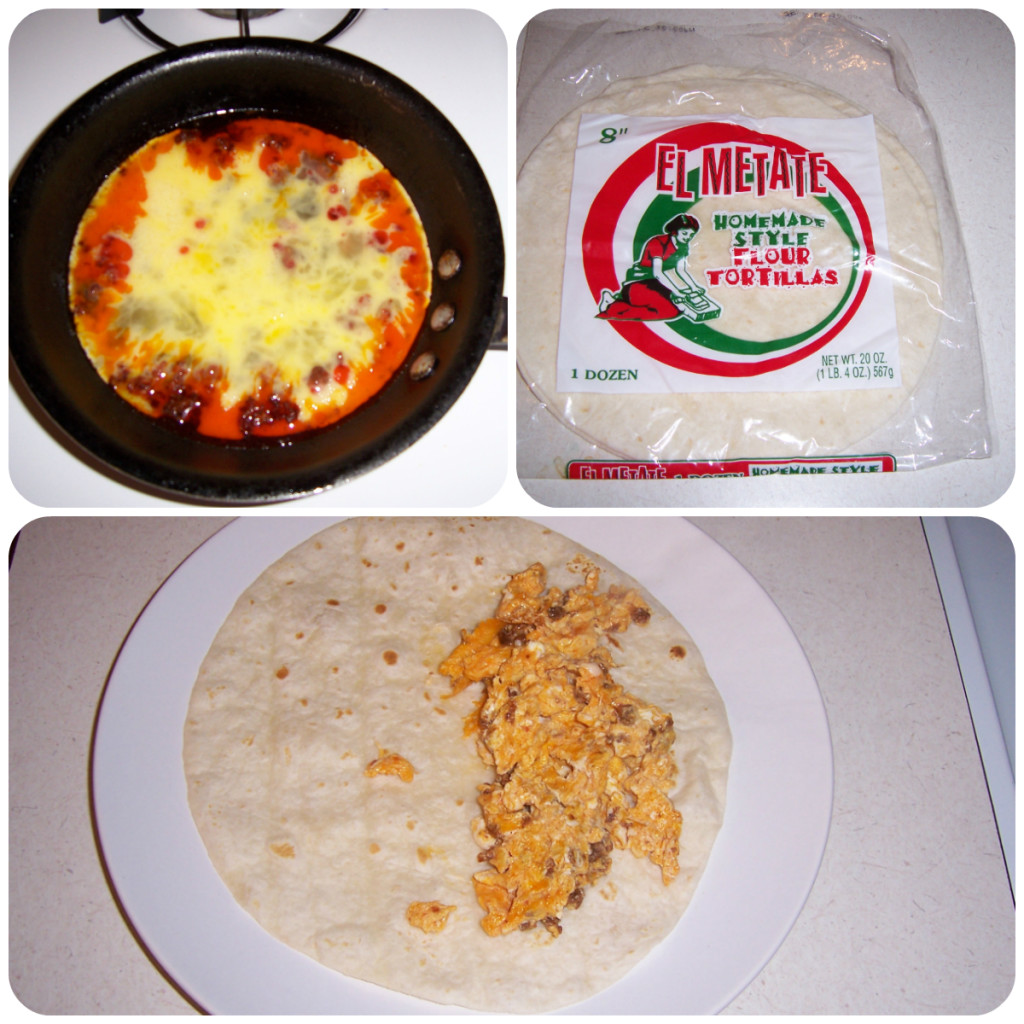 I then pour the beaten eggs into the hot skillet with the chorizo and scramble them together. You can add salt and pepper at this time if you like. Take your favorite flour tortilla and warm it up. Once the tortilla is warm, place the egg and chorizo filling on the flour tortilla. Some people might want to add some cheese but I prefer it without. Make sure that you don’t overcook the eggs because they will continue to cook when you roll the whole thing up. 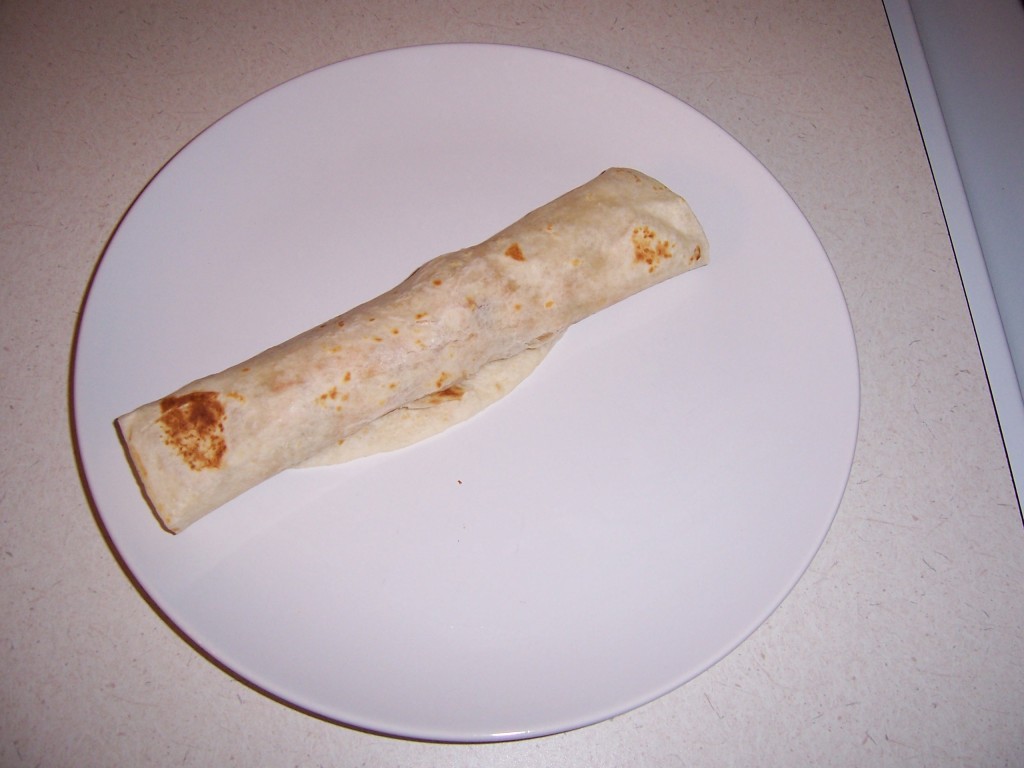 And voilà…here is your egg and chorizo burrito. I love this for breakfast, but I really felt like eating this tonight for dinner. The egg and chorizo mixture will make 2 burritos in case you were wondering.

Well, I hope you liked my Wallis dotticure and my burrito! Thanks for catching up with me today and talk to you soon.

Disclosure: All items featured in this post were purchased by me except for the Winstonia Store dotting tool which was provided to me by the manufacturer. For more information, please visit my disclosure policy tab.

A few days ago I broke two nails while I was cleaning and washing dishes. I got so irritated that I cut my nails off. I went chop crazy and cut my nails super short again…yes, painfully short. I know I said I wouldn’t do that again, but I couldn’t help myself. I had initially decided to use fake nails for this manicure and just polish them myself. However, they just looked so odd to me that I ended up prying them off and doing my own tiny little nails. I started out with 2 coats of essence Black is Black. 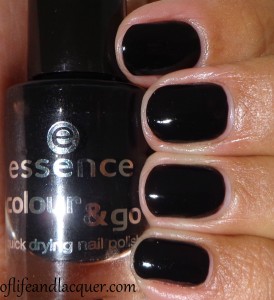 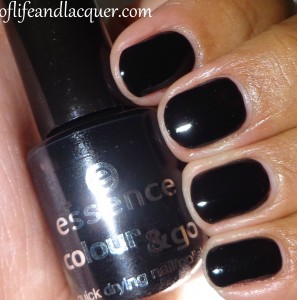 This really is my favorite black because it’s dark, shiny and super opaque. It reminds me of my favorite patent leather mary janes. 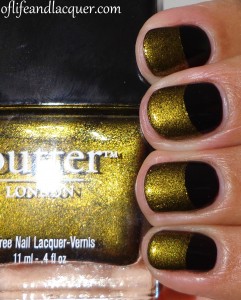 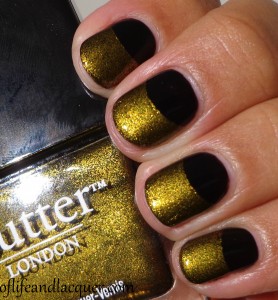 I then used Butter London Wallis for the half moons. I seriously never thought I would like this color as much as I do. I picked it up during the Coterie sale where I got 3 Butter London polishes plus a top coat for only $11!!! Talk about a great deal. 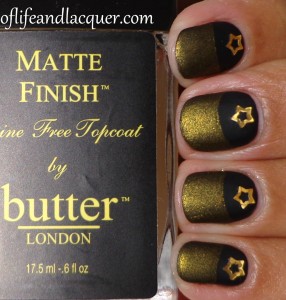 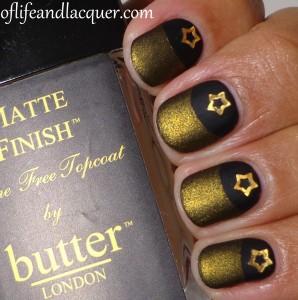 And lastly I applied some gold glitter stars before the final touch: a matte top coat. I had seen someone mattify Wallis and I was instantly in love so I had to try it myself.

I am satisfied with these nails despite how tiny my nails are. I can’t wait for them to grow a little so I can square them again. What do you think of this manicure? Don’t forget to check out the other manicures created by my fellow challenge participants. Thanks for stopping by and talk to you soon.

P.S. Sorry I’m a little rushed but I’m hangry (hungry + angry) and my brother is rushing me since we are going to my favorite mexi-food place. Ahhhh…tacos, carne asada, 7 mares, ceviche…I’m drooling.