As usual, here I am posting super late. I am such a spaz. I was pretty busy today so at least I have an excuse. Since I was short on time and lacking any really creative ideas, I decided to resort to stamping. I know, I know…I kind of cheated. But hey, at least I got the right challange design unlike other people. *cough* Nicole *cough* hehe.

I decided to finally use one of the glitters that so many people raved about when the China Glaze On Safari Collection came out. Now, which one to use? I Herd That or I’m Not Lion? I decided to give I Herd That a Whirl… 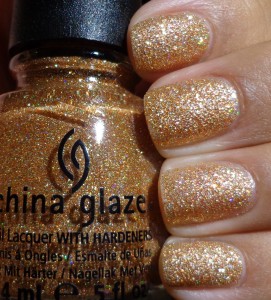 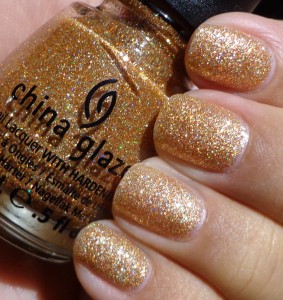 This glitter is absolute perfection. I am not kidding. It’s easy to apply, it covers nicely with only 2 coats and it just SPARKLES like a mofo. I love it and can’t believe that I have waited so long to use it. 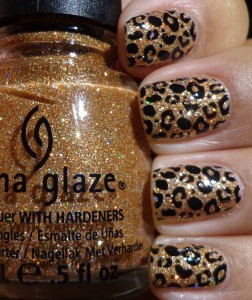 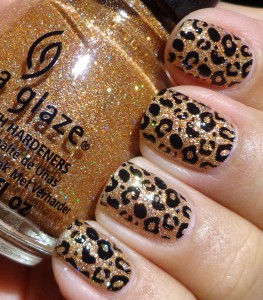 I used Konad plate M57 for this design along with Konad’s Black special polish. I think it came out pretty well. I am definitely happy with the simplicity of this mani. I Herd that is definitely the star here, and I can’t wait to use I’m Not Lion!!!

Since I have you here, don’t forget to check out my blog sale. I am doing a huge purge of polish. Most of my polishes have only been swatched once, and I really want to find a new home for them since I know I won’t use them much. You can see all the polishes I have for sale here.

Don’t forget to check out the other animal print manis for today’s challenge…or a floral mani if you’re Nicole. Let me know what you think and talk to you later!

Am I the  only one who really really likes this song?

Anyway, happy Sunday to all. Thanks for stopping by! I am kind of exhausted right now. I didn’t get home until around midnight last night and didn’t fall asleep until almost 2 am. Then I woke up at 6 am because my friend and I wanted to go to the beach. It’s been eons since I’ve been to the beach even though it’s literally like 10 minutes from my place. It was so nice to be out that early breathing fresh air and hearing the sound of the waves. I also saw tons of people with their dogs. When can I get my dog, dangit?!

We were there for a long time. We walked along the sand laughing and making fun of each other. See, I’ve known V since we were like 10 years old. We didn’t like each other very much until we were stuck working together on a project for one of our classes in 8th grade. So 20-some years later, we’re still friends and I’m very lucky to have her in my life. I always tell people that my litmus test for friendship is to travel together. Well, we have gone on vacation twice and we had a fantastic time. The first time we went to Hawaii which was freaking awesome…even if we got so hammered we could barely walk up the stairs at the hotel. Ok, maybe that was just me but I  know she was probably pointing and laughing. The next time we took a trip to Europe and went to Paris, Florence and Rome. She reminded me today of how we were freezing in Florence (it was late fall/early winter) but we HAD to have some gelato late at night. So we went to find a place that was open and walked outside eating our gelato and freezing our bums off.

Since V is a true friend, she told me that my nails looked ugly. Haha! Yeah, true biatch. (I still love you, though!) I can’t say that she’s wrong because I didn’t like my nails much so I didn’t even post them yesterday. They just turned out so ugly…kind of ghettoish. I started with Zoya Malia. I don’t have a lot to say about Malia. It just looks like OPI Do You Lilac It? to me. It is a color that I like but not terribly exciting. The formula was great, and it only needed two thin coats.

You can tell by the crappy job that I wasn’t that excited about doing my nails for some reason. I didn’t even do decent clean up! But wait till you see them after konading.

My nails are starting to look wonky to me because they are so long. However, I can’t cut them because I am going to beat Nicole at our imaginary nail competition. I just noticed a hair or fiber that got stuck on my middle nail. Can you spot it? How gross.  Anyway, I need to take these things off asap and try another color.

Last night was really fun as well. I went into a sushicoma with my sil. We both didn’t eat all day so we could fully enjoy our sushi. So this place that we go to is a little neighborhood joint. The sushi is really good, fresh, delicious and reasonably priced. Their service has always been on the slow side which we don’t usually mind because we are slow eaters and talk the whole time. Sometimes it does get a little ridiculous like waiting an hour or more to get our food when they are super busy. Surprisingly, they weren’t busy last night so we were annoyed with attentiveness. We should have counted how many times the waiter came by our table or the busboy peeked to see if we had any empty dishes. It might have been 20 or more times. It was getting beyond annoying. At one point, we thought we were on some hidden camera show to see how much we could take before we told them to fuck off and let us eat in peace. After we were done eating, they brought us the check without even asking if we wanted dessert!!! So of course we had to order some out of spite (and cause who are we kidding? we love our sweets!). We laid a bet to see how many times someone would come to our table to bug us while we ate dessert. My sil said 3 and I said 5. I won. 5 times!!!!!!!!!

After that we watched The Lucky One which was ok. There really wasn’t anything else we could watch and The Avengers was sold out for the rest of the night. Is it just me or does Zac Effron still look like a baby?

Can you tell I love purple?