Today has been a totally weird day. I know I said I wouldn’t be talking about work on my blog but I just have to say this: I hate it. HATE IT. You know when you hate going to work so much that you have nightmares about it? That’s me right now. Oh well. Hopefully it’s just a temporary feeling and I’ll grow more comfortable, but it’s looking pretty darn bleak right now. Buuuuuutttt….it sure is nice to have a paycheck. I was feeling so blah after work today that I decided to stop by Weinerschnitzel and reward myself with a chili cheese dog. I know, I know!!!!!! When I was getting out of my car, a homeless man was sitting on the other end of the parking lot and he yelled at me asking me if I could buy him a hamburger. I told him that I would see if I had enough money so I ended up buying him a burger and fries. I don’t know about you, but I always make an effort to help someone out. I am the person who always gives a buck or two to people standing outside with signs at the freeway off ramps. You’re probably snickering and calling me dumb since a lot of people seem to think that they are probably just using that money for drugs or alcohol. Honestly, I don’t care. I mean, if I give someone money, I hope that they are spending it on real necessities but if they are not, that is not going to be my excuse to never lend a helping hand. The other day I left for work kind of early because I wanted to stop at Starbucks. I saw a man with a sign asking for money because he was ill and hungry. I asked myself if I really needed that $5 Venti so I gave him the $5 instead. Ultimately, it’s a very small gesture and I just wish that we would all take some time to help others because I think we would live in such a better place if we did. I also had a super long chat with my mom today and told her that I wasn’t taking my depression meds anymore and that I haven’t been taking them for over 6 months. Of course she was kind of upset, but she was happy that I’ve been feeling good and haven’t had any type of relapse despite some of the stressful situations that have popped up lately. She also told me that she has kidney AND gall stones!!! WTF?! The worst part is that she is refusing to get surgery. I get so mad at her sometimes because she always thinks that she can get rid of stuff with crazy home remedies.  I had gall stones about 6 years ago and I nearly died. No joke. I ended up in the hospital for close to a week because my HMO didn’t approve immediate surgery and the stones escaped and blocked my bile duct or some weird thing like that. If you’ve never had a gall stone attack, consider yourself lucky because it hurts like a mofo. Blargh…I’m so yappy today. Anyway, I should move on to what I wanted to show you tonight: Jindie Nails Burrrberry. 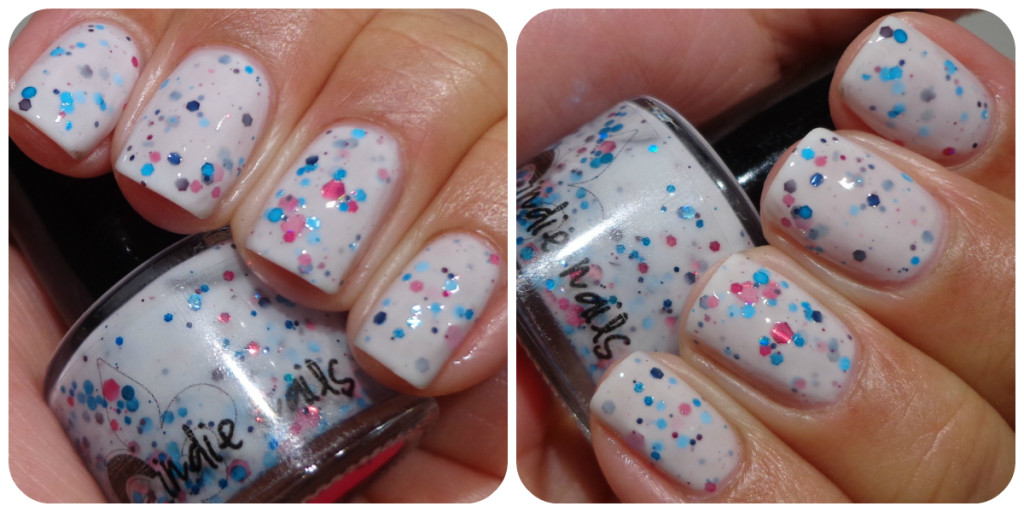 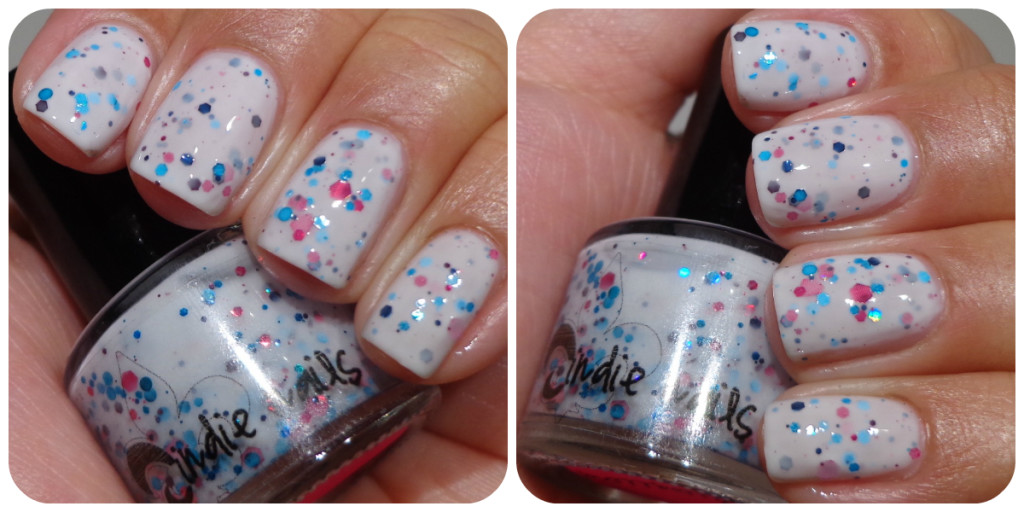 I know you’re probably seen a million and a half swatches of this nail polish, but it’s just freaking fantastic. I had a tiny bit of trouble applying this mainly because of the bottle shape and the tiny brush. I ended up adding some thinner and storing the bottle upside down for a little while. Once I did that, I felt that I was able to get much more even glitter distribution. We have been seeing a lot of polishes with this awesome milky base, and I seriously cannot get enough! I was super lucky to snatch this bottle up during Jen’s last etsy restock along with Strawberry Cupcake.

So what do you think about this polish? Have you jumped on the indie train yet? I think I am doing pretty well so far this year with featuring more indie polishes and brands so I’m pretty proud of myself. If you’re interested in purchasing some Jindie Nails pretties, make sure that you like Jen’s facebook page here so you can get all her restock notices and announcements. Thanks for stopping by today, and I will talk to you soon!