Sometimes I can be a total weirdo and focus on insignificant details. Take the brand Nicole By OPI, for example: I have a handful of these polishes and generally like the formula and the brushes, but I really hate the awkward bottle shape.  For whatever reason, I have fixated on my distaste for the bottle shape and don’t usually purchase a lot of these polishes. I also kind of can’t stand the Kardashian Empire so when I see the NOPI Kardashian Kollection, I want to hurl. Anyway, enough about my weird fixations…this is about the polish!! There are 5 Target Exclusives from the Nicole By OPI Fall 2012 collection, and I have 2 of those to share with you today.

The first one up is Just Busta Mauve. 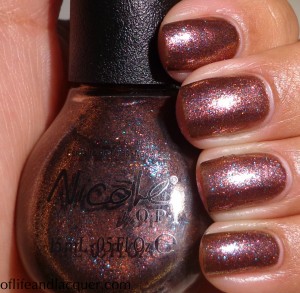 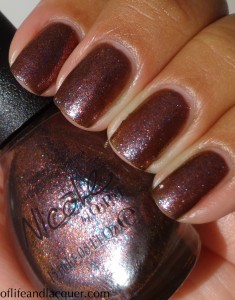 I really thought that this was a strange color when I looked at the bottle. I had absolutely no idea what it would look like on my nails with all those weird colors floating around, but it really surprised me. In fact, I love it.  If I had to complain about something, it would have to be that the formula is a little thin but it does build up without any problems. From the look of the polish, I was expecting it to be kind of gritty but it was perfectly smooth. As an aside, the name of this polish brought back fond memories of me playing Bust-A-Move on the Neo-Geo arcades when my mom would go shopping with us. She would give my brother and I a bunch of quarters and we would run to the back of this store we use to go to and we’d play Bust-A-Move and Super Mario Bros. 3 on another machine until our hands cramped or our eyes bled–or both. Ahh…to be a kid again.

The second color is If The Blue Fits. 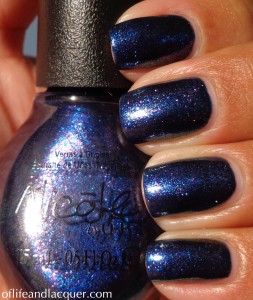 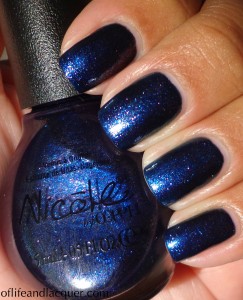 Since I’ve been on a blue kick lately, I really like this polish because it’s not a boring color: it has just the right amount of kick to attract attention. The formula on this was better than on Just Busta Mauve as it was a little thicker so you can get away with less coats. I love all the different colors in this polish!

Overall, I think both of these polishes are total wins! If I had to pick just one, I would probably go with Just Busta Mauve. These polishes have been out at Target stores and online since August so you should still be able to pick them up if you like either of these. They retail for around $7.00 unless you wait and catch them on sale.  So what do you think of these two colors? Which one would you get if you could only have one–what a true Sophie’s choice! (Not! You know you’d get both.)

Thanks for catching up with me and talk to you soon!

**These products were provided for review purposes. All opinions are my own.**