Happy Monday–not! So I hope your Monday was better than my craptacular day back to work after a day off. Last week I was moaning on twitter how I thought my package with my two new Jindie Nails polishes had gone missing–oh the horror!!! The USPS website was  showing my package as delivered, but I hadn’t received anything. I have had quite a few mishaps when it comes to misdelivered and stolen packages so I was sad! The worst instance of this was back in 2000. I had gotten kinda drunk (You know those sad drunk times when you drink alone and cry? No? Just me? Alright!), and I was feeling nostalgic since I had just come home from a year in France. I got online and somehow managed to purchase a round trip ticket from LA to Rome for $375 on priceline.com I didn’t even notice that purchase until I noticed the missing money in my bank account a few days later. Well, I called priceline and explained what had happened (I was depressed and drunk and accidentally bought a plane ticket), but they told me there was nothing they could do since the tickets were non-refundable. Well…it was either throw $375 in the garbage or go on this trip…so what did I do? I went on the damn trip! But before that, my tickets were delivered to someone else. Since those were the good old days of paper tickets only, I was SOL. FedEx was no help and priceline told me there was nothing they could do–again! After tons of calls, FedEx told me that they “might have” delivered it to another Cynthia who lived a few streets over whose street was very similar to mine. WTF? Anyway, I headed over there and sure enough–my tickets were there. Why did those dumbasses take the package and not say anything? Anyway, that trip was kind of a comedy of errors from day one so I should have known better than to actually go on the trip. I got to Rome and stayed for a few days. I then headed to Florence via train and I ended up staying at the dumpiest hostel you could ever imagine where I proceeded to get the flu. It was the middle of Winter so it was colder than a penguin’s butthole. I dragged myself around the city trying to get medicine before taking a train to Paris for another few days. Ughhh…it was a horrible trip because I was so sick but I was still happy to be over there even if I was alone and sick.  Ok, back to the polish: it actually hadn’t been delivered even though the website claimed it was and it arrived the next day. YAAAAAAAYYYYYY! One of the pretties I was anxiously awaiting is the featured polish for today: Jindie Nails Princess Consuela Banana Hammock. 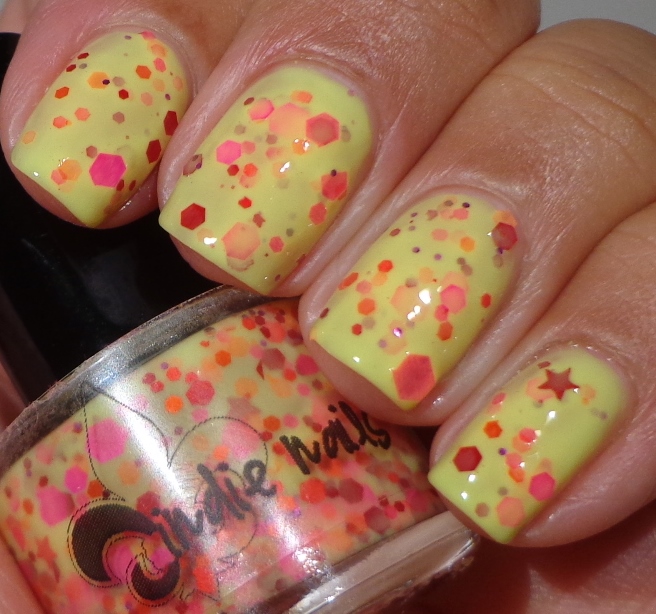 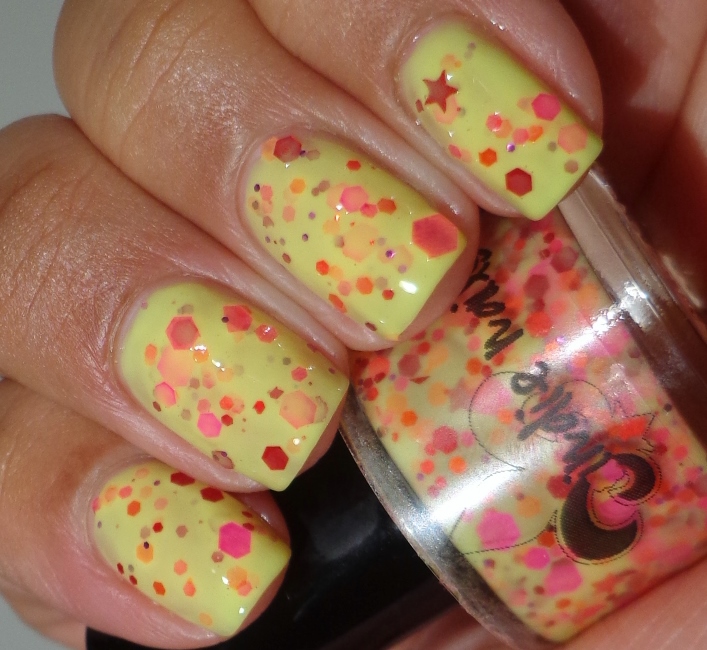 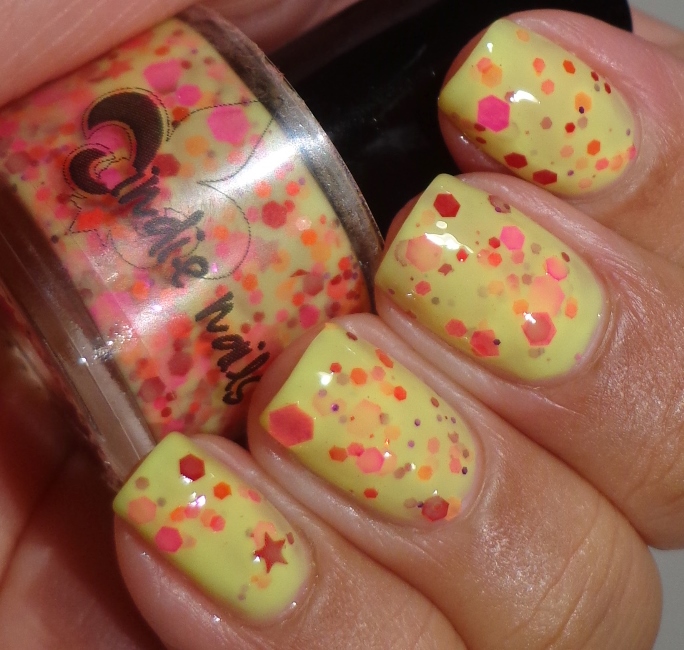 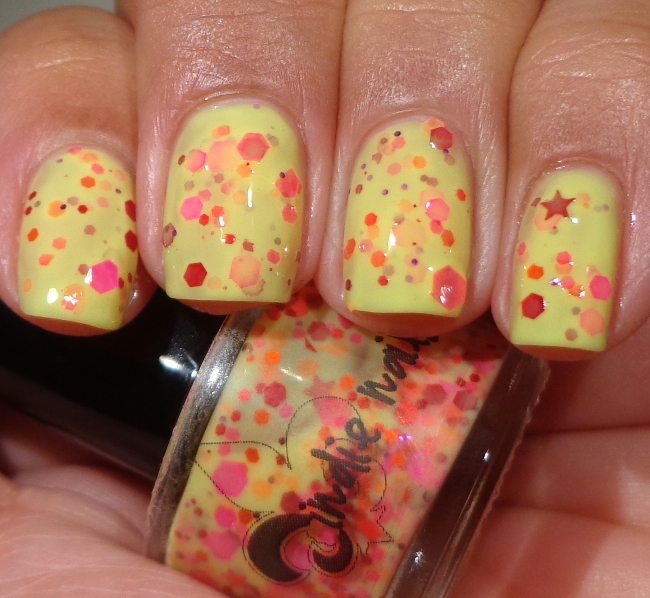 As you probably already know, I have been having a love affair with yellow polish this Spring so I couldn’t wait to get my hands on this. Additionally, it pays homage to one of my favorite shows ever: Friends! Didn’t we all love Friends? I think Phoebe was probably my favorite character on the show and the episode where she changes her name to Princess Consuela Banana Hammock and Mike decides to call himself Crap bag in retaliation is classic. This polish was a little sheer but it builds up nicely. I ended up applying three thin coats for the swatches above. I do have to mention that getting the glitter out of the bottle is a real biatch. I added a few drops of thinner and let the bottle sit upside down for a few minutes before I used it which seemed to help a little but the glitter still likes to settle. Also, the larger pieces of glitter can lift a bit from your nails so make sure you apply a generous coat(s) of top coat so everything is nice and smooth.

Here is the classic moment between Phoebe and Mike:

Do you have a favorite Friends moment? Who was you favorite Friend? What do you think of Jindie Nails Princess Consuela Banana Hammock? Let me know what you think! Thanks so much for stopping by today, and I will talk to you soon.

P.S. Have you ever bought something ridiculous while drunk?