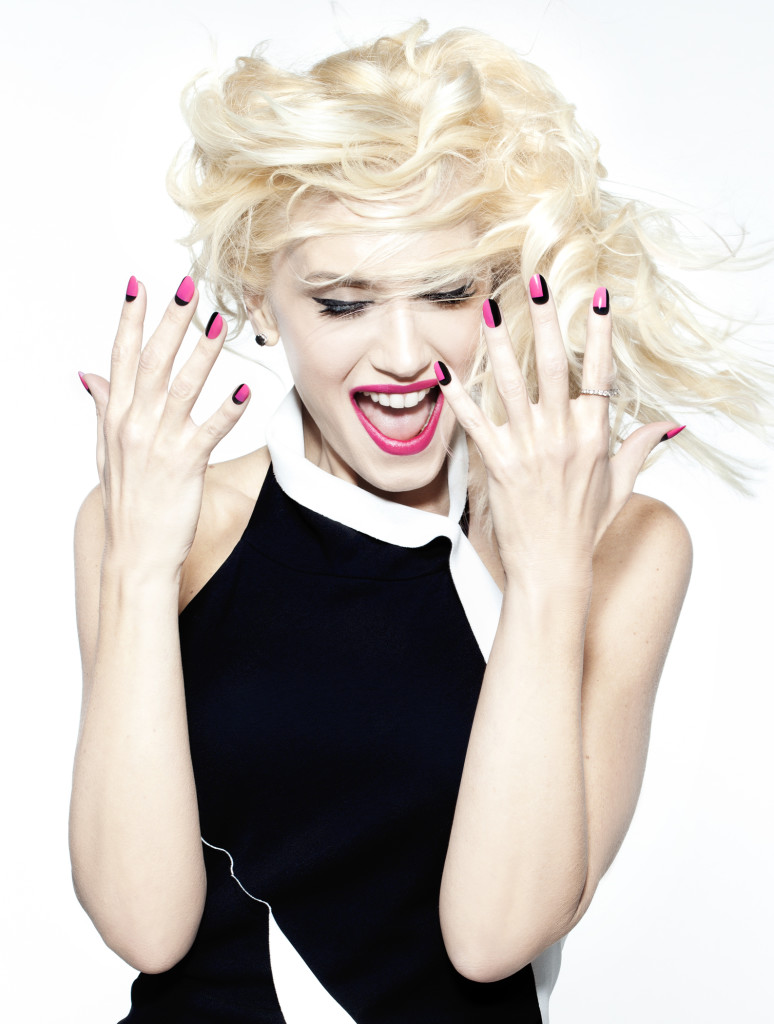 OPI joins celebrity partner Gwen Stefani in announcing seven new limited edition nail lacquers for 2014, featuring standout color in breakthrough finishes. Highlights from the collection include a bold red lacquer that pays homage to Gwen’s signature lipstick, a new semi-matte satin finish in shades of gold and black, and a mirrored chrome paired with a special base coat.

Inspired by the 2013 Metropolitan Museum Costume Institute Gala that featured the theme “Punk: Chaos to Couture,” OPI Executive VP and Artistic Director Suzi Weiss-Fischmann decided to create a collection of lacquer celebrating the role of music as a major influence in fashion. “With her expertise as a singer, songwriter and designer, who better to collaborate with than Gwen Stefani?” asks Weiss-Fischmann. “Known for her trademark red lips, bold eye makeup and nail art, Gwen uses beauty to accessorize her style.”

Gwen’s signature red OPI hue – Over & Over A-Gwen – is available in a boxed set, which includes Swarovski black crystals and silver, gold and pewter studs in bar, square, diamond and circle shapes for creating unique nail designs, as well as nail glue for easy application. Love.Angel.Music.Baby. and 4 in the Morning feature a new, semi-matte satin finish designed to be worn without top coat. Push and Shove, a bold chrome hue, is also worn without top coat but requires a special complimentary base coat – Lay Down that Base. One thin coat of Lay Down that Base topped with two thin coats of Push and Shove yields an intense, mirrored finish. The collection is rounded out with two glossy crème lacquers and one sparkly glitter shade: Hey Baby, I Sing in Color, and In True Stefani Fashion.

“OPI wanted to create a collection as dramatic, diverse and glamorous as its namesake,” adds Weiss-Fischmann. “With crème and glitter hues, new satin matte texture, a mirrored chrome and SWAROVSKI ELEMENTS, Gwen Stefani by OPI presents the latest in pigments and finishes, while combining elements of haute couture and street fashion.”

Gwen Stefani by OPI includes the following seven limited edition nail lacquers: Hey Baby, I Sing in Color, Love.Angel.Music.Baby., 4 in the Morning, In True Stefani Fashion, Push and Shove* and Over & Over A-Gwen**.

Gwen Stefani by OPI nail lacquers contain no DBP, Toluene, or Formaldehyde, and feature OPI’s exclusive ProWide™ Brush for the ultimate in application. This promotion will be available beginning January 2014 at Professional Salons, including Beauty Brands, Beauty First, Chatters, Dillard’s, JCPenney, Pure Beauty, Regis, Trade Secret, and ULTA, for  $9.00 ($10.95 CAN) suggested retail for each nail lacquer. The boxed set including Over & Over A-Gwen and SWAROVSKI ELEMENTS will retail for $14.95 ($18.95 CAN).

*Must be worn with Lay Down that Base, which is complimentary when purchasing Push and Shove **Sold only in a boxed set including SWAROVSKI ELEMENTS

As the world leader in the professional nail care industry, OPI is committed to providing high-quality products and services to both salons and their customers, along with a focus on industry safety and innovation. Known for its exceptional formula, fashionable colors and iconic names, OPI’s heavily-pigmented lacquers are super rich, long-lasting and chip-resistant – offering an affordable luxury to consumers. OPI nail lacquer is available in over 200 shades and contains no DBP, Toluene, or Formaldehyde. Each lacquer features OPI’s exclusive ProWide™ Brush for the ultimate in application. Currently, OPI is available in over 100 countries and retails a full line of professional items, including nail treatments, finishing products, lotions, manicure/pedicure products, files, tools, gels and acrylics.

A singer since childhood, Gwen has fronted the band No Doubt for the past 22 years.  During this time she has achieved worldwide success as a performer, songwriter and recording artist selling almost 50 million albums worldwide. No Doubt’s five genre-blending albums have showcased her adept songwriting and poignant lyrics with number one hits like “Don’t Speak”, “Just A Girl”, and “Hey Baby” along with many others.

After the double-platinum retrospective Singles Collection, featuring the hit “It’s My Life,” Gwen released two highly successful solo albums. Love.Angel.Music.Baby was released in 2004 and The Sweet Escape was released in 2006.  In 2009, after a nearly five-year hiatus, No Doubt completed a 50-plus city North American tour performing for more than 750,000 fans that summer. The following year they were invited to perform for President Barack Obama and first lady Michelle Obama, Oprah Winfrey, Sir Paul McCartney and others as part of the annual Kennedy Center Honors. In 2012, No Doubt released their sixth studio album “Push And Shove” which debuted #3 on the Billboard Top 200 Chart. The band is currently writing and recording new music to be released this year.

In addition to her singer-songwriter career Gwen’s original sense of style and lifelong passion for creating her own clothing designs culminated in the launch of her fashion label L.A.M.B. (Love, Angel, Music, Baby) in 2003.  Gwen is widely recognized as a trendsetter and accomplished designer within the fashion industry L.A.M.B is a luxurious collection of clothing, handbags, shoes and fragrance, based on Stefani’s personal style and aesthetic.  In 2005, Gwen launched her highly successful second brand Harajuku Lovers.  Harajuku Lovers is a playful line of apparel, bags, shoes, fragrance, stationary and electronics that reflects Gwen’s love of Japanese culture and Pop Art.  L.A.M.B. and Harajuku Lovers are sold in over 2500 retail doors worldwide. In 2011, Gwen launched Harajuku Mini exclusively for Target in all 1700+ doors.  Harajuku Mini is a designer children’s brand that includes shoes, bags, accessories, swimwear, and home.

In 2011, Gwen became actively involved in the relief and recovery effort in Japan.  In addition to donating $1,000,000 to Save The Children’s Japan Earthquake-Tsunami Children in Emergency Fund, Gwen created a charity auction and limited edition T-shirt with 100% of proceeds benefiting the relief effort.

Oh my nail Gods, you guys!!!! I got this press release when I was at work and I literally squealed with excitement which my neighbors did not appreciate since I startled them. I absolutely adore Gwen Stefani so I really can’t wait to get my hands on this collection. I’ve loved Gwen and No Doubt foh-eva and still remember those high school days when I would sit in my room and belt out Don’t Speak. Yes, I was a total emo teenager. Is there any other kind? Anyway, what do you think? Are you as excited about this as I am?