One of the pivotal moments of my childhood was in the late 80’s when my parents finally caved and bought my brother and I a Nintendo. The NES (Nintendo Entertainment System) became like a babysitter for my mother because it would keep my brother and I entertained for hours. Any time she wanted to punish me, she didn’t take away the TV or my toys: she took away the Nintendo. Although I was only 8 years old, I became quite good at Super Mario Bros. and my life’s goal became to pass all 8 worlds. I don’t even remember how long it took me to pass the whole game, but I do remember the day it happened as if it was just yesterday. I had gotten to world 8 stage 4 and I had no more lives left and I was little Mario which meant that one touch would kill me. I made it all the way to Bowser/Koopa and in some random inspiration, I just ran under Bowser when he jumped up and  pulled the bridge out from under his feet. At that point, both my brother and I stared at each other neither daring to utter a single word. Once we saw Princess Toadstool, we both screamed. I threw the control in the air and we jumped up and we hugged each other while still jumping up and down. Does this make me sound silly? Maybe. But I don’t think I can remember any other massive accomplishment at that age that rivaled the sweet triumph of beating Super Mario Bros. This video is of level 8-4 and obviously this person is pretty good at the game. I just wanted to show you what it looked like:

Even the music made me what to cry. So why am I telling you about my nerdiest of nerdy childhood moments? (Ok, there is another moment that is nerdier than this: I created a “Plant Club” and made all the neighborhood kids join. It involved digging holes and looking for pre-hisotric plants and fossils. Yeah, stop laughing. Now. Bite me, ok?)  The reason why I am sharing this is because you might start to imagine what a video game and polish boner I got when I heard about Dollish Polish’s Super Mario Bros. Collection. So when I got It’s A Me, Mario! from the lovely Amanda (go check out her blog–she’s awesome!!) for my birthday, I was seriously in Nintendo heaven. I’ve been admiring it on its velvet cushion for the last month or so and finally decided to use it. I started with 2 coats of Essie Butler Please: 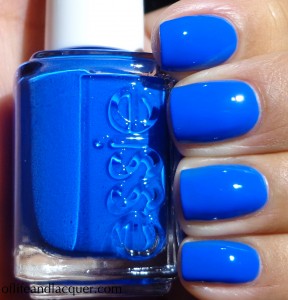 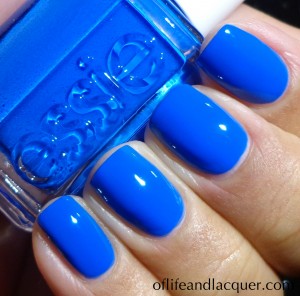 When I applied the first coat ofButler Please, I was kind of surprised at how watery it seemed. It was really thin and kind of streaky. However, after a second thick coat, it was fine.

And here is the star of the show: 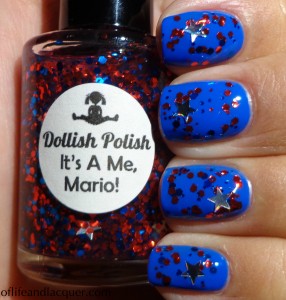 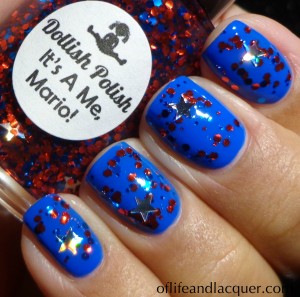 This is 1 coat of Dollish Polish It’s A Me, Mario! The blue and red glitter was not very hard to apply, but getting some stars was a serious bitch. I had to fish for those stars for what seemed like ages. In the end, I don’t care that I had to fish for stars because they were worth it. I love this polish.

I didn’t have anything to eat for lunch so by around 5:00, I was starving. I wanted a sandwich–with a twist–so I decided to go to El Gallo Giro which is a chain of Mexican food restaurants that are based in Socal. I was craving horchata as well so I thought it would be perfect. This was my lunch/dinner: 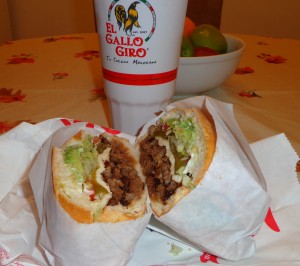 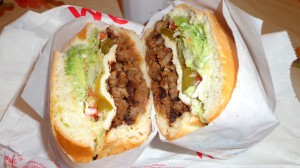 This thing was massive–massively delicious.  It is a carne asada torta which is basically a grilled steak sandwich. They grill thin steak and layer it in a toasted bun with mayo, cheese, lettuce, tomato, jalapenos and guacamole. Holy moley this was good…and I’m full until next week.

What do you think of my Super Mario Bros. mani? Do you have any nerdy childhood moments that you would like to share? No? Just me? Alrighty then.