It feels really fan-freaking-tastic to be writing my first post of 2013. I know that making a big deal out of the first day of the year doesn’t really make that much sense, but I can’t help but feel like it’s a chance at a fresh start. I always remember one of my teachers in high school telling us that we all had A’s when the semester started and that it was up to us to maintain it–what a novel idea that was! Applying that to my life today, I have to work really hard to maintain some equilibrium. I know that I have some difficult things to work through, but I will make things work.

I’m usually not a super festive person and I wasn’t really in the mood to do much anyway so I spent my new year’s eve at home with the mooch and I got chocolate wasted–where you replace chocolate with a lot of beer and wasted with…wasted. We watched a lot of episodes of The Walking Dead, drank beer and ate snacks so it was definitely good times. The mooch turns 23 tomorrow but I don’t think I’m getting him a gift since he didn’t even get me a Christmas present–he can be such a turd.  Besides, my gift is a year-round gift since I basically give him a place to live and food to eat. He should be grateful for that, right?

So what did I decide to wear on this first day of 2013? I busted out another bottle of Silly Lily Polish that I bought at the same time as Halloween 2012. I couldn’t decide what base color to use so I just went with my tabula rasa polish: China Glaze White Out. (John Locke is probably cursing at me from his grave.) 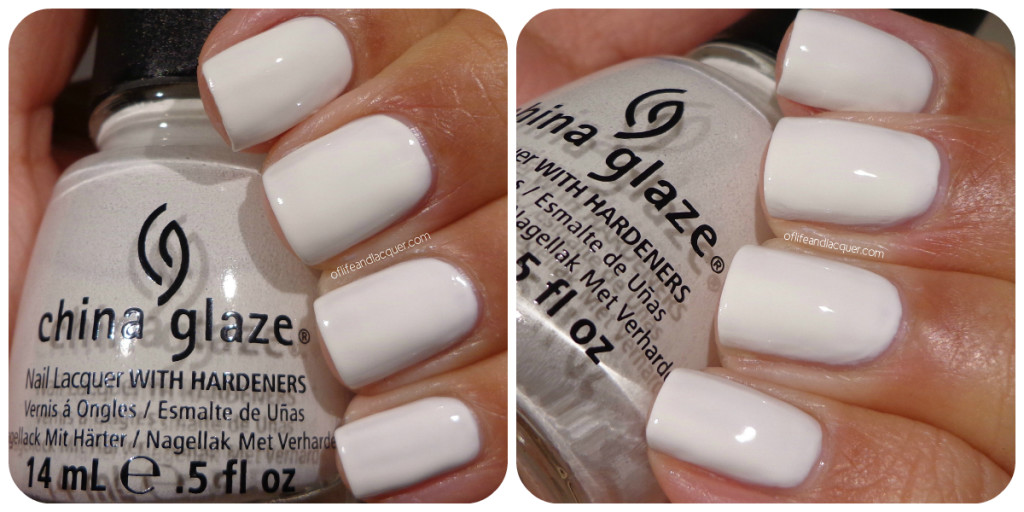 I’ve used China Glaze White Out quite often–especially when I was doing the nail art challenges because I really like having a white canvas to get my creative juices flowing. I also really really like wearing white nail polish because it’s such a huge contrast to my darker skin tone. 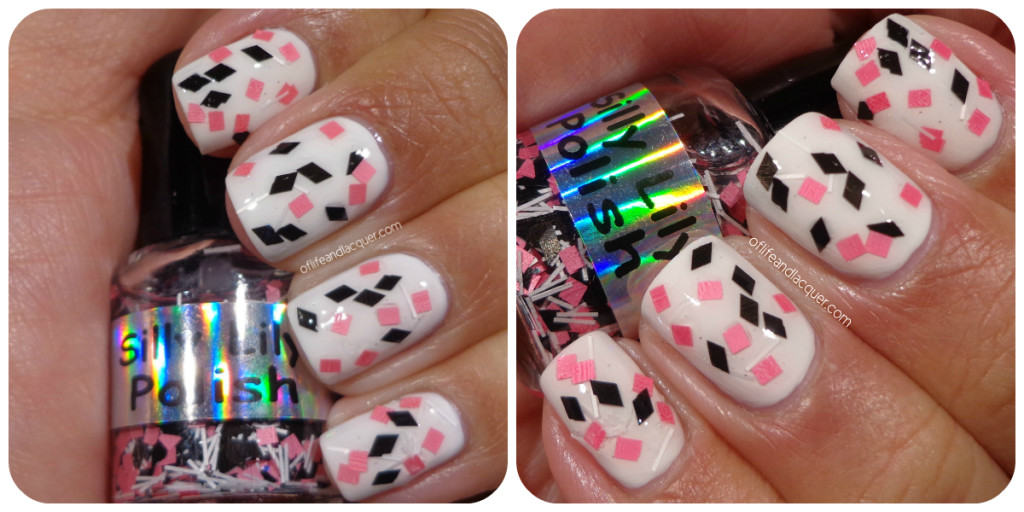 And here is Silly Lily Three’s A Crowd which is full of  matte pink squares, black diamonds and white bar glitter. Holy John Ritter, I love how this looks. Yes, I know the name of the show is Three’s Company but I couldn’t stop singing the theme song while I was using this polish.

I think I was way too young to be watching this show, but I loved it. I used to jump around and try to sing the theme song even though I didn’t know the words. Ahh…to be a kid again! Anyway, back to the polish: I love how it looks but it was a major biatch to place the glitter evenly over my nails. I should have added some thinner to the polish because the base was super goopy. Overall, I think the finished look is worth the work because I am loving the combination of white, black and pink. Since I decided to use a white base, you can’t really see the white bar glitter so maybe next time I will use a red base.

So what do you think of my first 2013 mani? If you like these super cute Silly Lily polishes, then you are in luck because she is having a pretty awesome sale right now. You can use coupon code: NEWYEAR10 to take 10% off your total order and it is valid until 1-13-13. Also, any order over $20 (before shipping charges) will receive a free surprise jewelry item as well. Lily has some really great polishes for sale on her Etsy shop so head on over there to check everything out. (If I had polish funds right now, you better believe I would be destroying her clearance section!)

I hope you all had a fantastic New Year’s Eve no matter what you ended up doing. I’m super excited to really attack the whole job hunt now that the holidays are behind us–and that is NOT sarcasm. Thanks for stopping by today, and I hope to bring lots of crazy new content for your this year. I have a bunch of ideas that are probably golden ticket ideas….so wish me luck!

Ok my nail peeps, after my previous royal screw up which ended up with me not even posting any challenge nails, I had promised that I would post my manicure no matter what. I am still on the fence about my mani but let me tell you a little bit about why I chose the movie I did. Some of my fondest childhood movie/book memories revolve around Dr. Seuss. Even as an adult, my love for his work has not diminished. In fact, I credit Dr. Seuss for getting me my first Au Pair job when I was in France. My first interview was with a family with two little girls and after my interview with the parents, I was introduced to the 2 young girls. I talked to them and one of them demanded that I read a book to her so I looked at her little collection and zeroed in on The Lorax. I new I had them. Once I opened up the book, I remembered how much fun I had reading that book so I shared that with them..even singing some of the song from the movie version. Of course they loved me and I got the job.  So while I racked my brain to figure out what to do for today’s movie inspired nails challenge, I knew I had to find a way to use How The Grinch Stole Christmas. Hey, it’s nearly December, and I just bought my Christmas tree today. I was telling Nicole that I got a tiny tree and that it was still $30. $30 for a sad little Charlie Brown tree!!!! I don’t care how tiny it is. What counts is that it’s mine and that I’m going to have fun decorating it.

So without further ado, here is my How The Grinch Stole Christmas manicure: 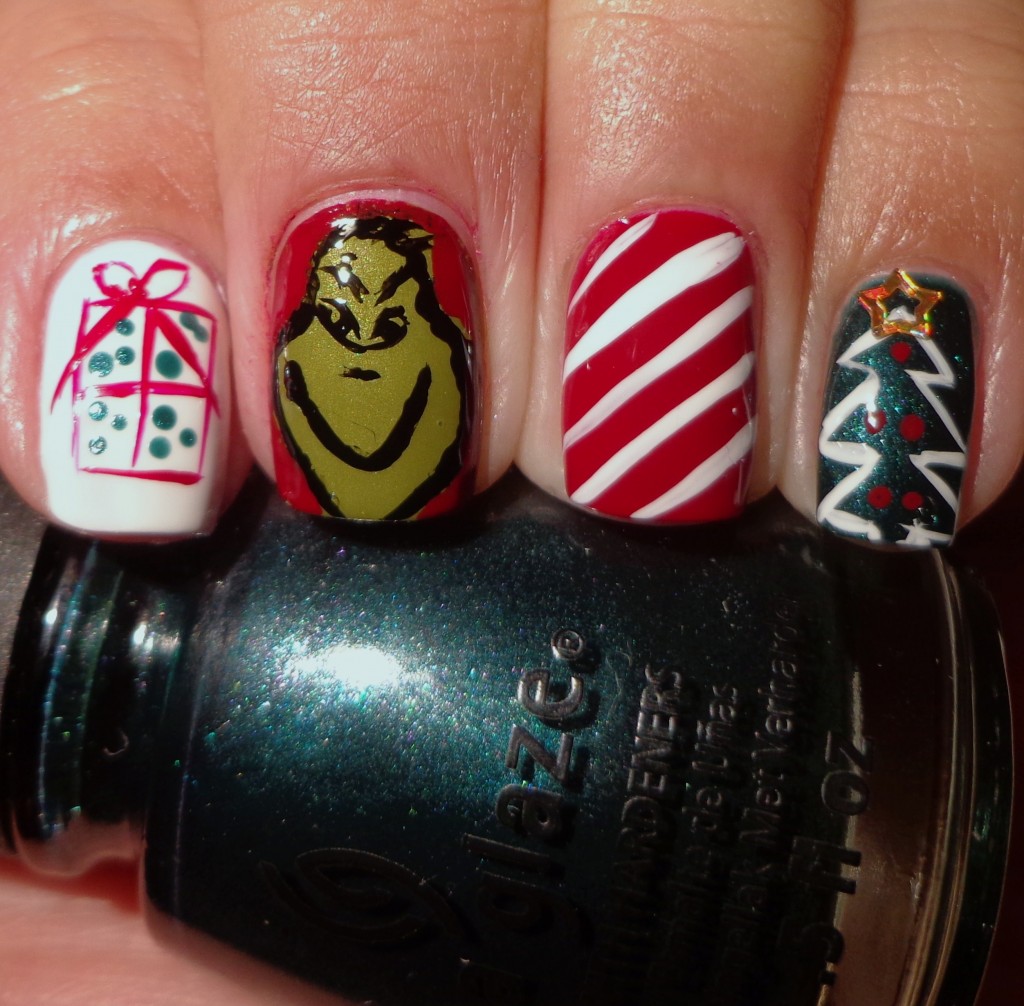 Do you want to know how I created this manicure and what products I used? Read on…

All the polishes I used are from China Glaze: White Out, Emerald Fitzgerald,Westside Warrior, Sunshine Pop, Adventure Red-y and Liquid Leather. I found that Westside Warrior was a little too dark so I lightened up the color a bit with Sunshine Pop. The only other tools I used were dotting tools and a very thin nail art brush. I can honestly tell you that doing free-hand nail art is getting a tiny bit easier and I am so glad to have participated in this challenge because it pushes me to try things I normally wouldn’t. I’m totally not happy with the clean up on this mani, but I was tired and just wanted to get them done already! 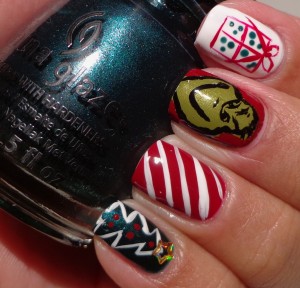 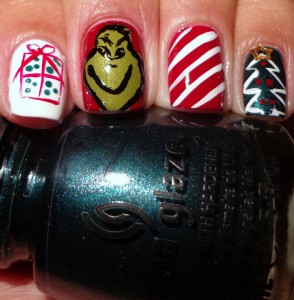 So what do you think of my Grinch nails? Do you have any fond Dr. Seuss memories?

Don’t forget to check out Nicole’s nails–they are super cute. Thanks for stopping by and catching up with me.

The closer we get to finishing this challenge, the less “inspired” I feel. After yesterday’s gluttonfest, I haven’t eaten anything besides toast today. I guess I am still kind of full. I still have a nice piece of tri tip so I will probably have some of that for dinner. I’ll just have to come up with some interesting side dishes later. So maybe I’m still feeling blah from eating so much junk and that’s why I lagged on doing my nails for today’s nautical inspired nails challenge. Let’s get to it, shall we?

I started out with China Glaze White Out as my base. 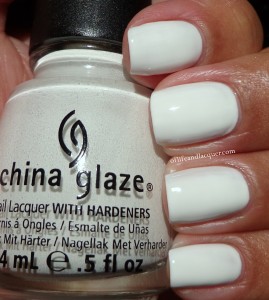 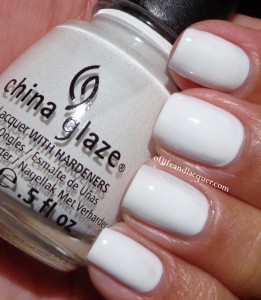 I don’t usually paint my nails all white, so it’s really nice to have a nice and opaque white polish to use. This is three very thin coats.

For the nautical part I used a combination of stripping tape and stamping. 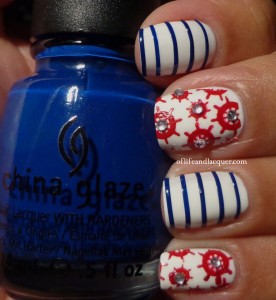 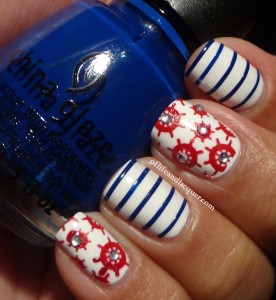 I used cheeky plate CH 49 for the wheel design with Adventure Red-y as the stamping polish. It is not a perfect stamping polish so I had to go over the design with a dotting tool and brush when needed which accounts for some of the mess-ups. Still, I don’t think I did too poorly with it.

How is everything with you after your thanksgiving feasting? Did you end up going shopping? I’m happy to report that I have avoided the stores so far and probably will for the rest of the week. Thanks for stopping by and checking out my latest nail disaster. Our next challenge will be inspired by a celebrity…oh boy! Don’t for get to check out Nicole’s nautical nails over at Polish Me, Please! Talk to you soon.