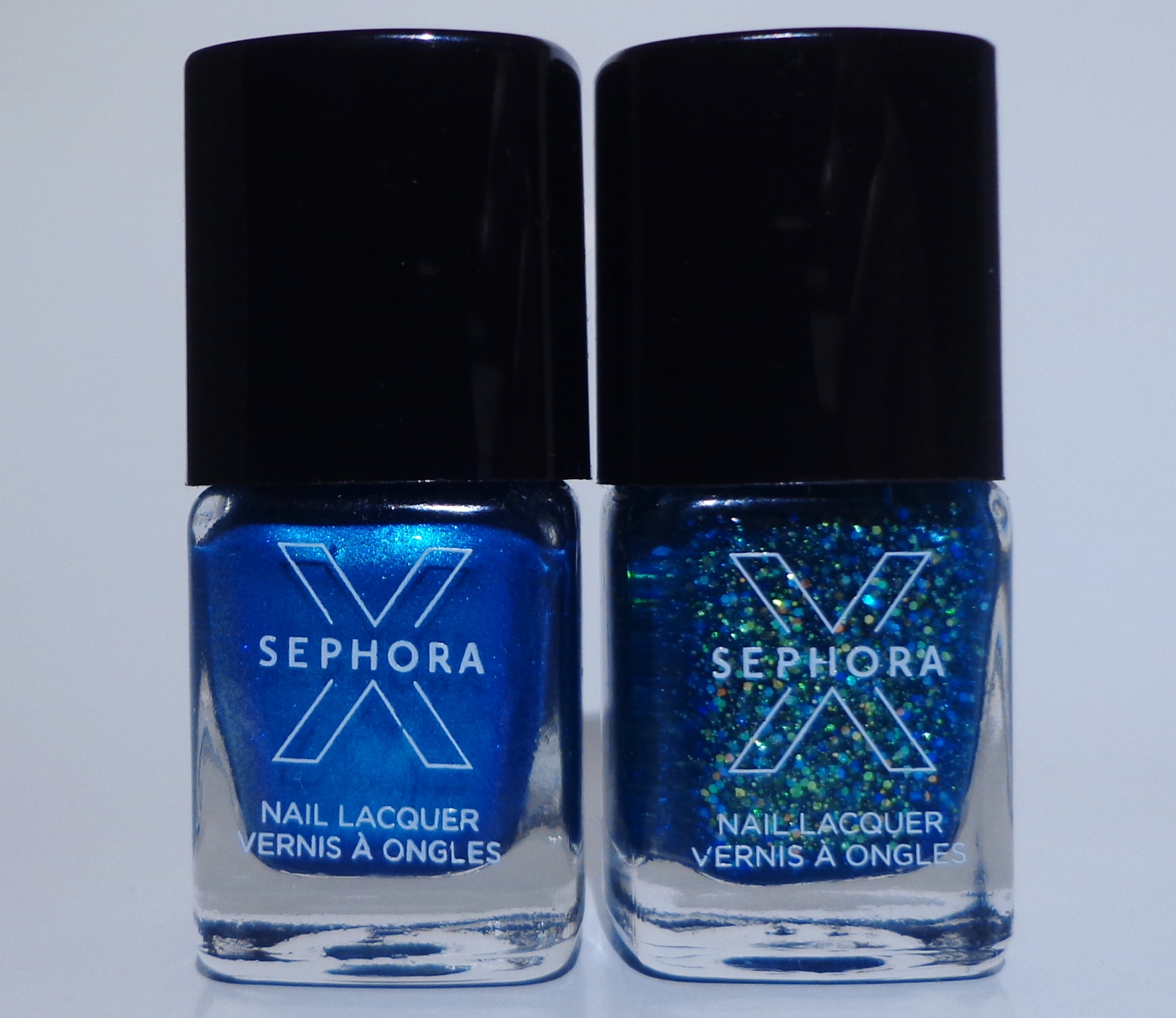 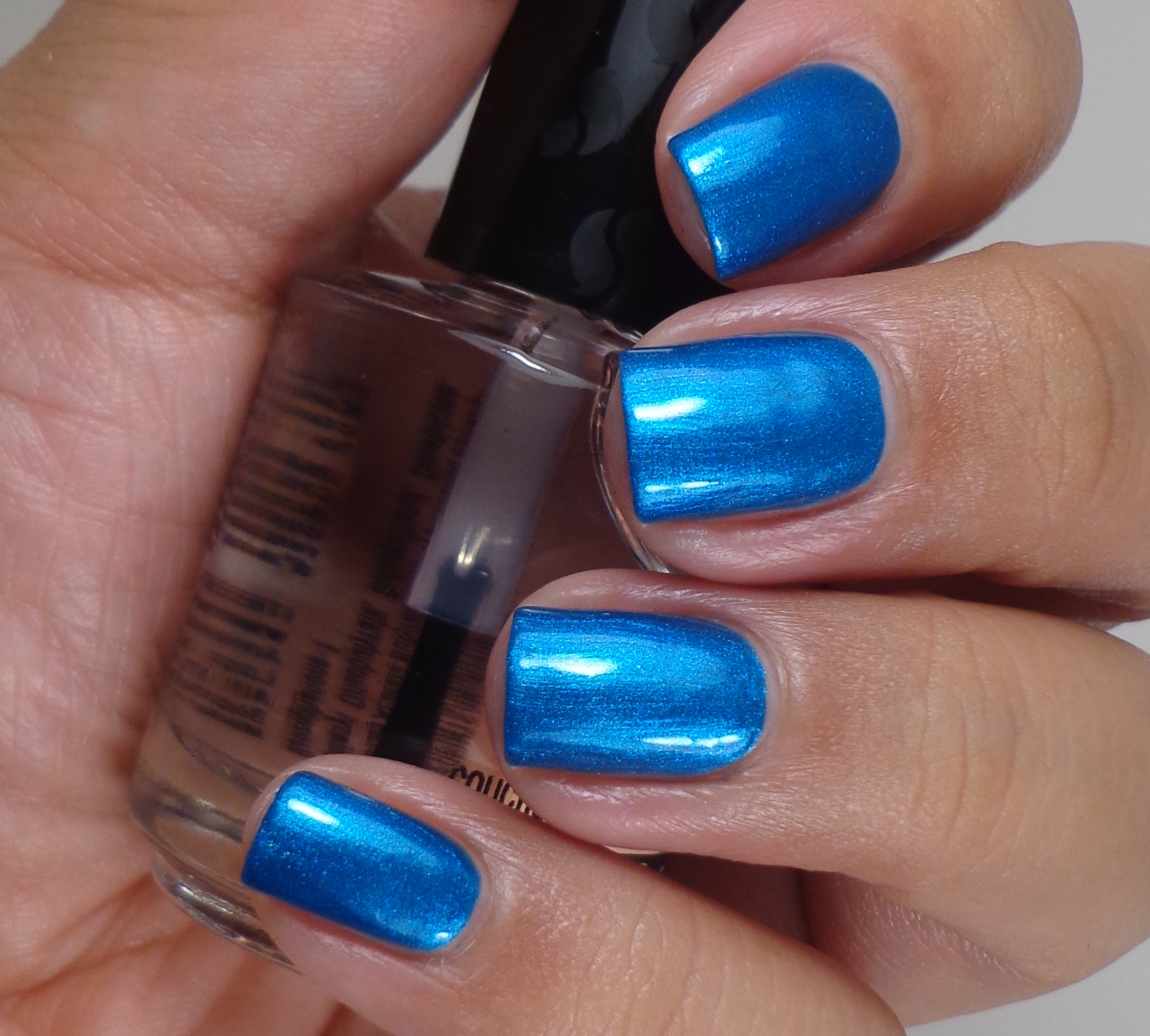 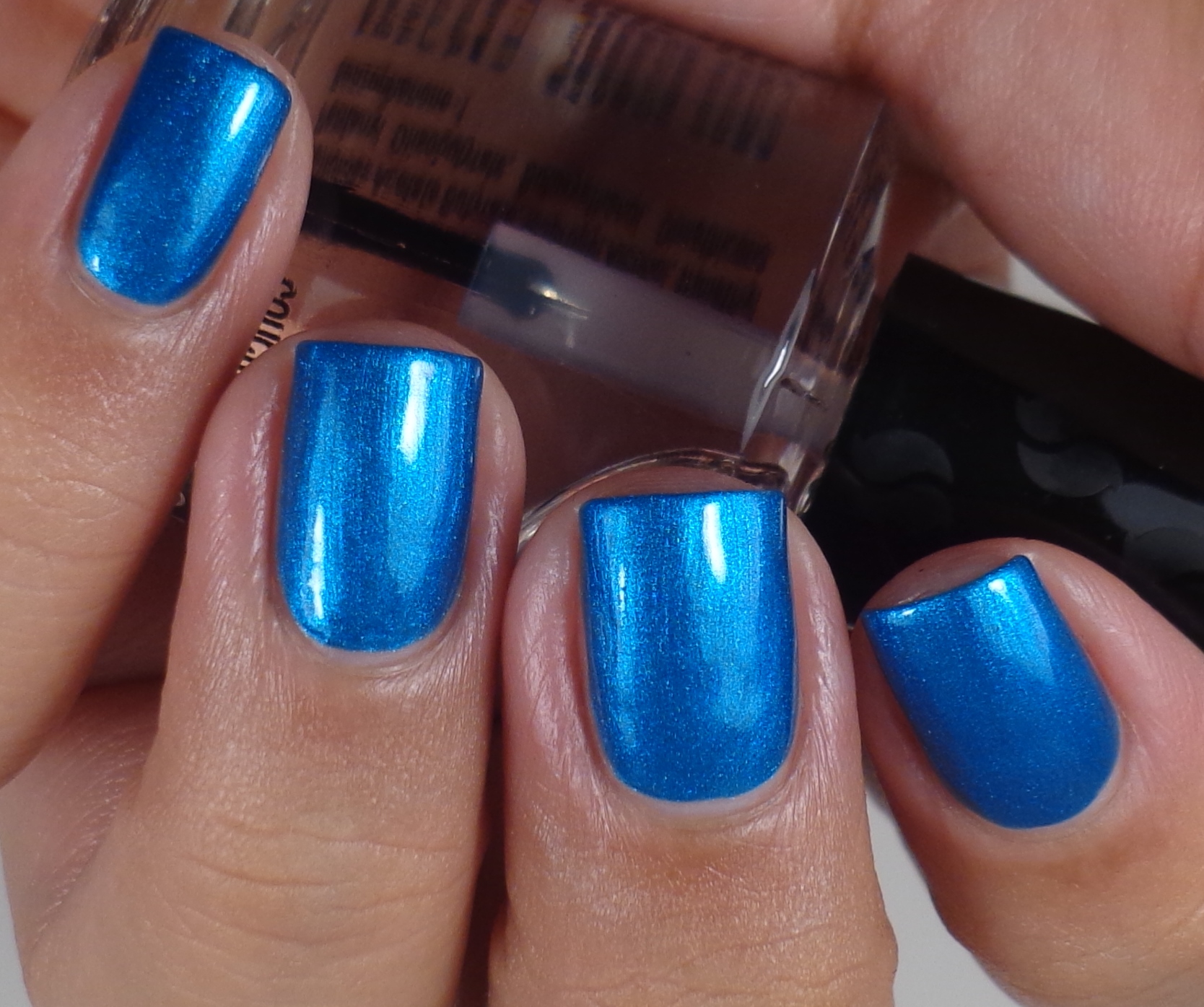 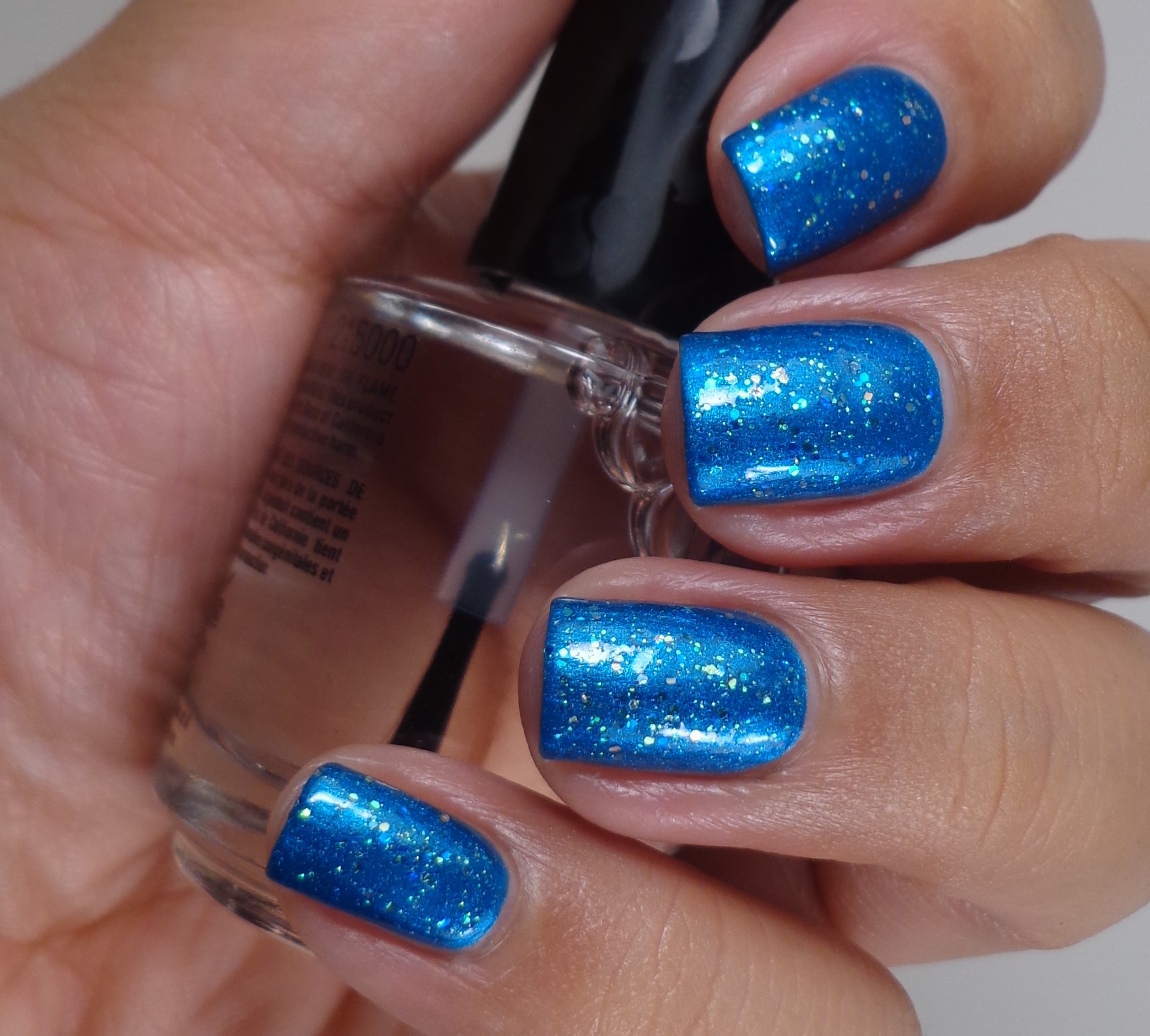 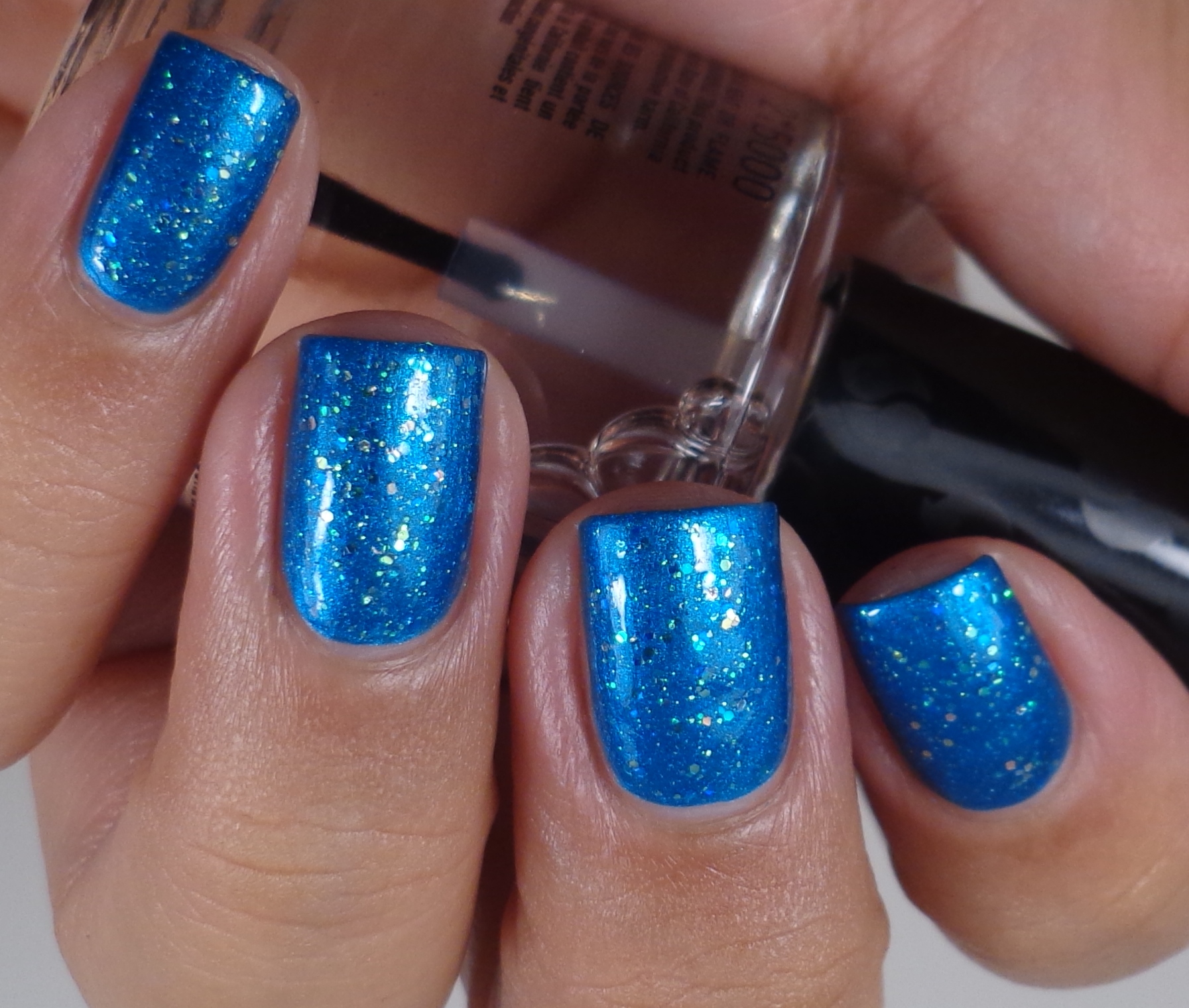 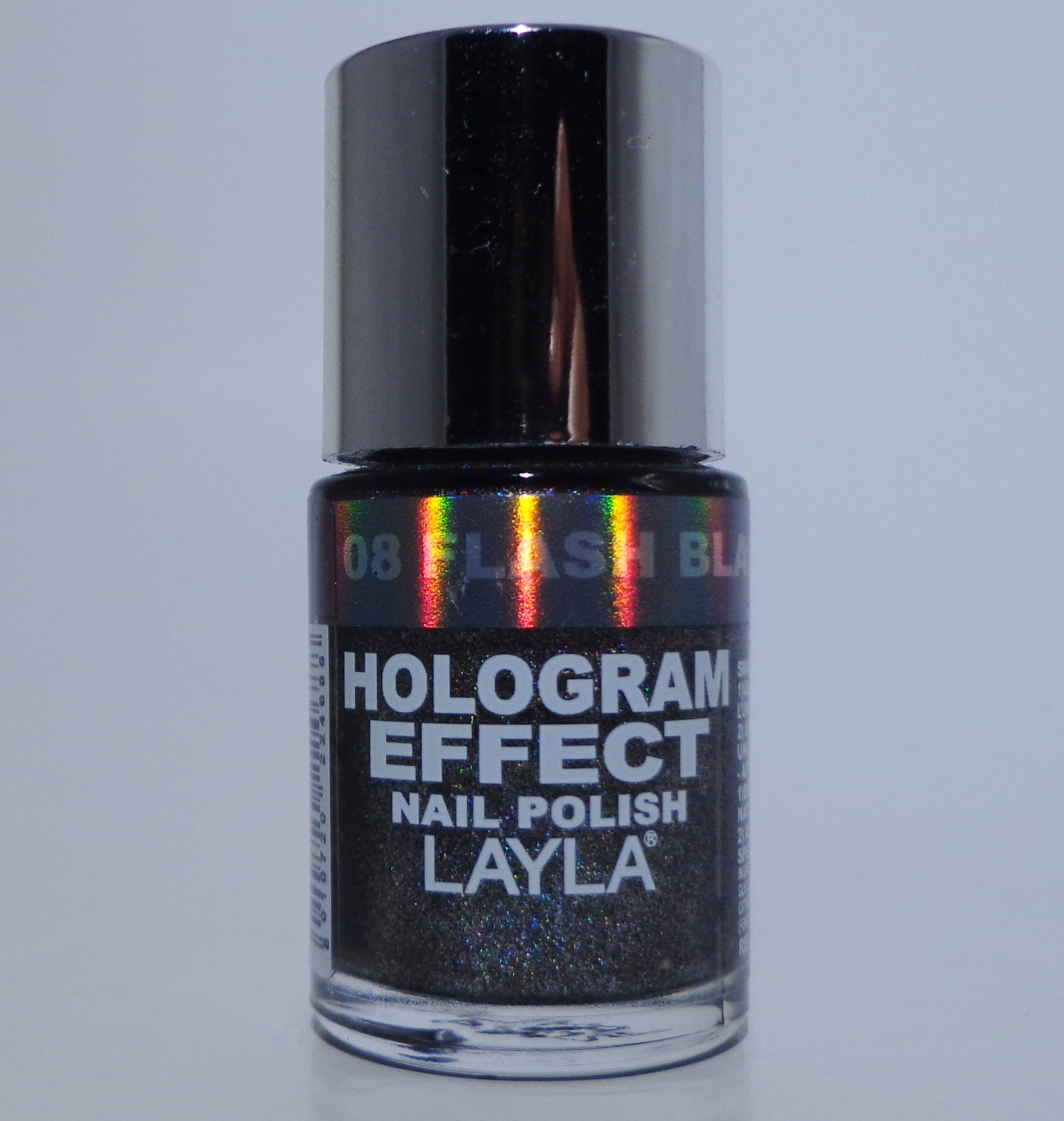 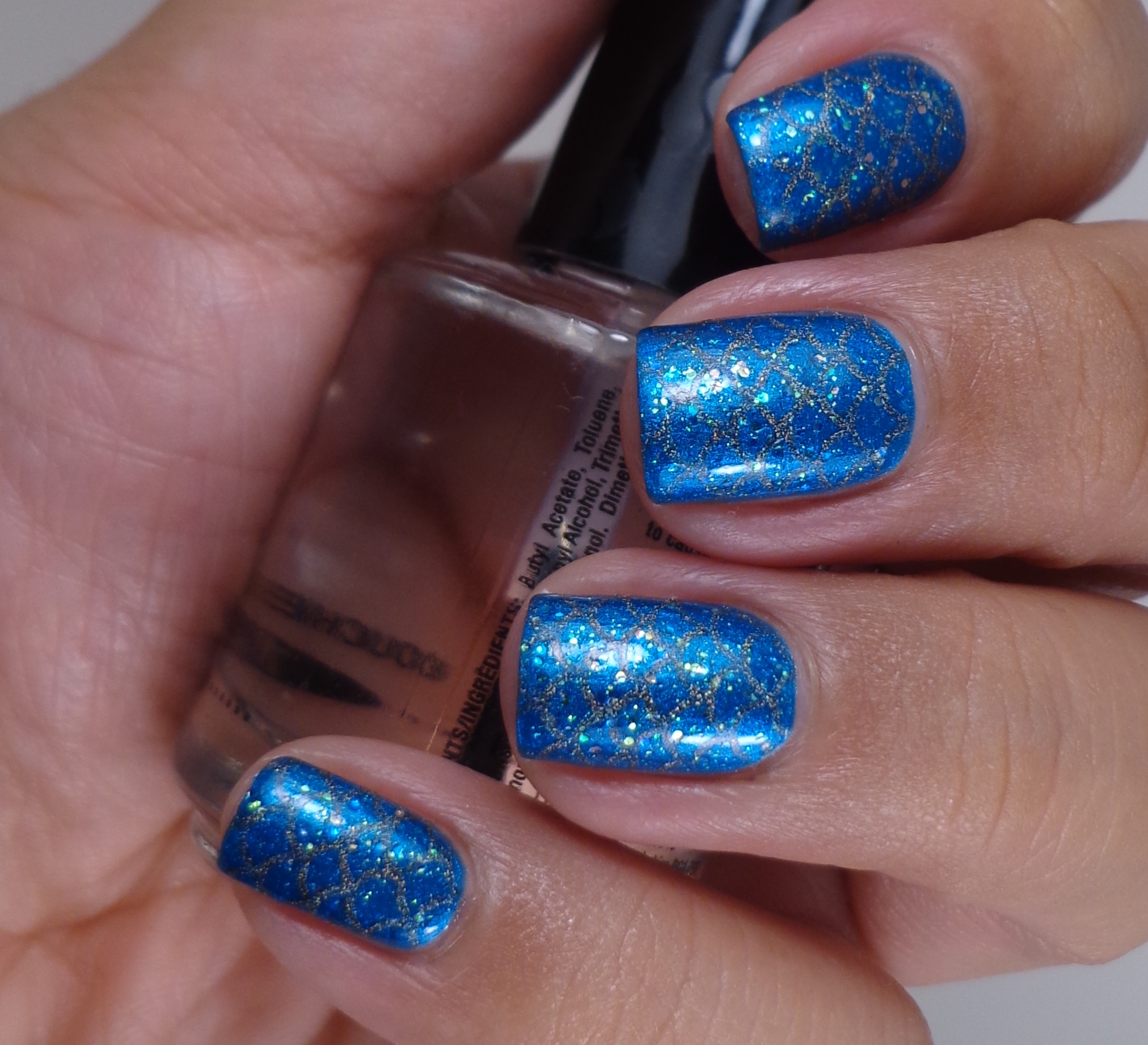 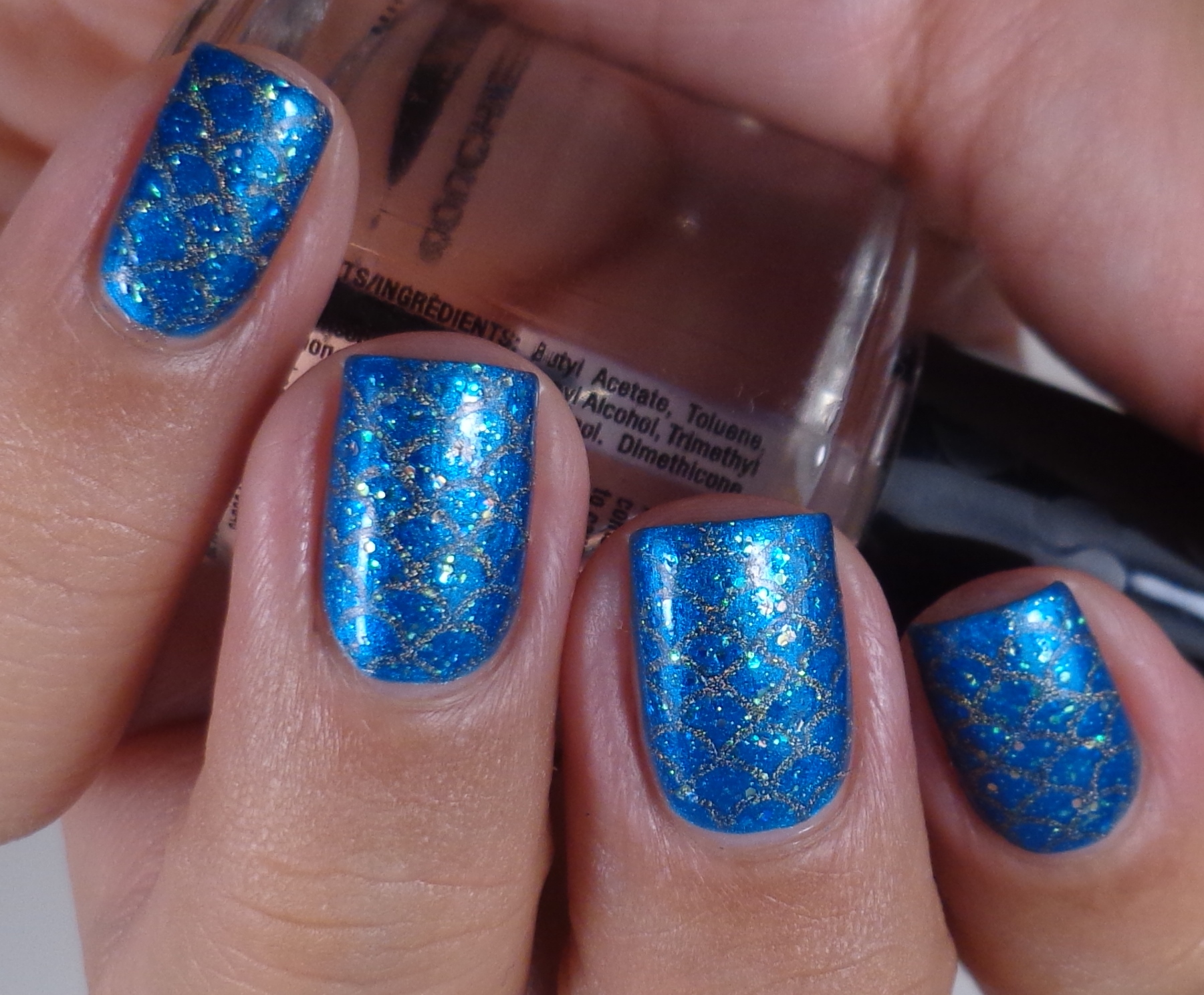 Remember how I was complaining about how cold it has been lately? Well, today it’s going to be in the upper 70’s/low 80’s and here I am wanting to complain again. haha!  Is it so hard to just have nice mild and temperate weather that is season appropriate? I guess so! This weekend is supposed to be super nice so maybe I’ll take advantage of my last two days of unemployed freedom and go to the beach or something outdoorsy like that. How’s the weather in your neck of the woods? Since it’s getting warm, I decided to wear a polish that was a little brighter than what I wore previously which was essentially a black/purple polish. I settled on yet another lovely from the Sation Nailstock Colletion: Sation I Paint In Peace. 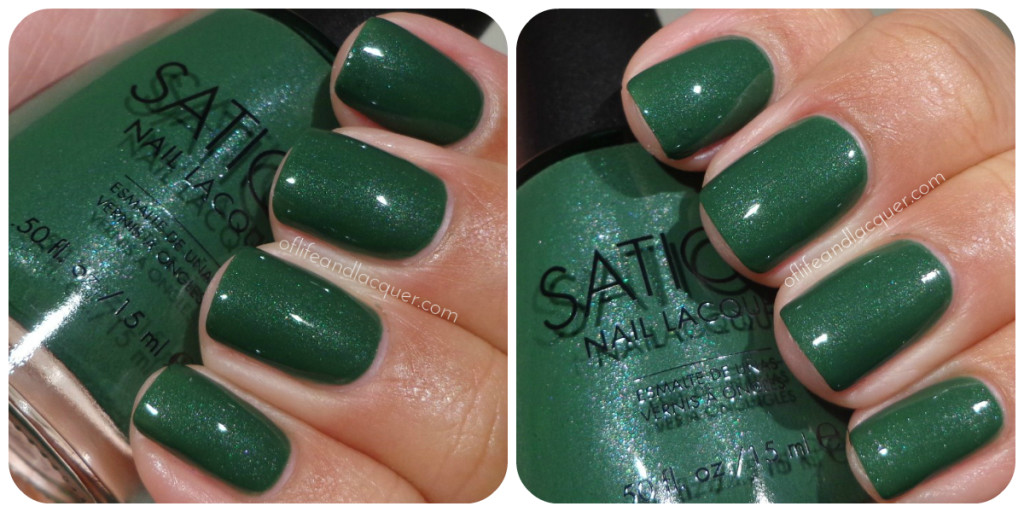 Sation I Paint In Peace is a beautiful dark and mossy green with a strong and noticeable silver shimmer. The first coat of this polish was super sheer so I was cringing inside thinking that I would have to apply 5 gazillion coats but it was perfect after the second coat. I should know better than to second guess my beloved Sations. 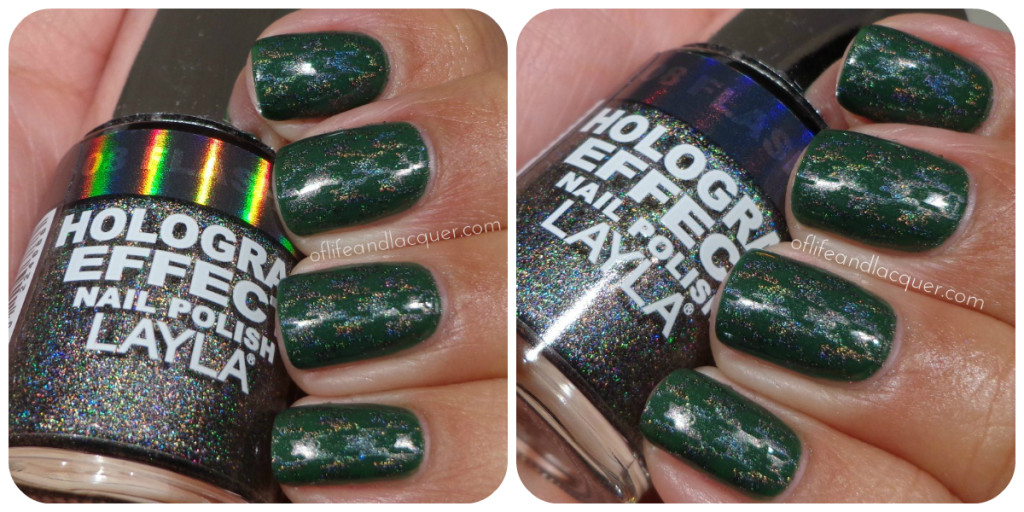 I then used Layla Flash Black and a design from Mash plate MASH 47 for this subtle houndstooth design. Even though it looks super subtle in these pictures, you can really see the design in real life. I am so in love with using holos to stamp.

I hope you’re having a nice weekend. Thanks for stopping by today, and I will talk to you soon!

Disclosure: Sation I Paint In Peace was provided to me by the manufacturer or their PR firm.  Layla Flash Black was purchased by me. For more information, please see my disclosure policy tab here.

Hello there! The weather is pretty kick ass in So Cal today: it’s sunny but chilly and really windy. It’s the perfect weather for staying in bed all day but that’s not happening today. I actually overslept today even though I am always up fairly early so of course today was the day that I was going to get an early call from my new employer to interview me in French. Nice. I probably made a horrible impression since I sounded like I was groggy and  tired. Maybe I’m coming down with something. If I am going to get the flu, I hope I get it now so that I can be ok by the time I start my new job in another week. Remember how I was saying that I’ve been super lucky lately? Well, last night I was in a conference call with my fellow Latina Lifestyle Bloggers, and I won a raffle for a ticket to attend the Third Annual National Lifestyle Blogger Conference & Junket!!! I was super excited about this because I really wanted to go but the ticket is a few hundred dollars and I just couldn’t swing that with the whole not working part. Well, I am super duper excited to attend this conference and hope that I learn tons of new stuff. Blogging has become a passion for me, and I really hope that I can continue to grow my blog and that you all enjoy reading it as much as I enjoy writing it.

Moving on to the nail polish, I have China Glaze Draped In Velvet to share with you today: 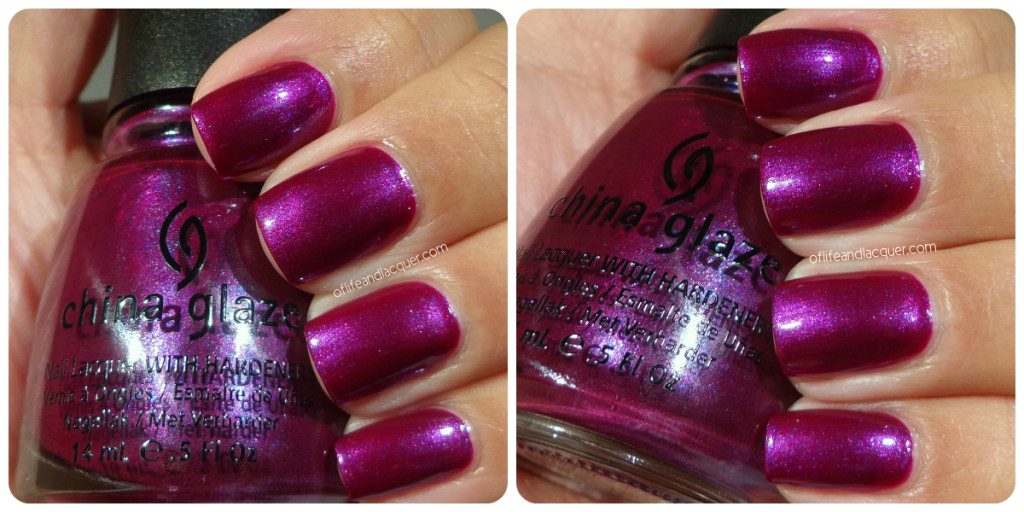 China Glaze Draped in Velvet is from the 2006 We Adorn You Collection which obviously pre-dates my polish obsession. This color is like a magenta, blue leaning, shimmery purple. The formula was pretty decent like most China Glaze polishes. I can’t say that I’m blown away by this color but it’s nice. 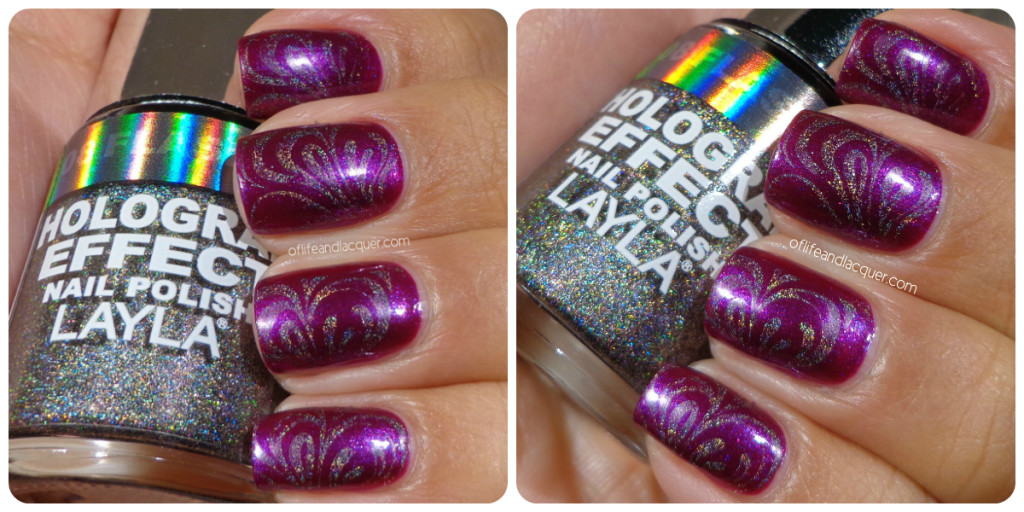 I then took out my Layla holo in Flash Black and used Konad Plate M63 to stamp this design. I really like how this turned out because it looks all swirly and almost whimsical.

Sorry to keep it short today but my friend is patiently waiting for me to finish up this post so we can go grab some lunch! 🙂 Thanks for stopping by today, and I will talk to you soon.

A few weeks ago, Jessica from Once Upon A Polish blogged about a facebook group called Adventures In Stamping where everyone votes for a particular look or color scheme and then all the ladies post their manis every Sunday. Well, I thought it sounded really fun so I joined! I really didn’t know what to do so I started looking through my melmers and realized I hadn’t used Layla Flash Black.

Call me crazy, but I actually don’t really like Flash Black on me.  It just looks so weird on me, and I’m really disappointed…not to mention that Layla holos chip in 5 seconds on me.

I then stamped over Flash Black with Konad special polish in red and plate BM 322. I then used a dotting tool to add the black dots with China Glaze Liquid Leather. One word: barf. I hate how this turned out but not all manis are going to be winners, and you have to embrace the good with the bad. I have no idea why I thought that stamping over Flash Black would be a good idea. It just looks dingy and grey…not interesting at all. I’m annoyed that I spent so much time on this mani and ended up not even liking it; hey, at least now I know Flash Black isn’t what I thought it would be.

So I think my first Stamping Sunday Challenge is a big fat fail. Hopefully I will do better next week. Voting has already started and our three choices are:

I voted for using silver, gold or bronze as a base, accent or stamping color. So far this choice is in the lead, and I hope it stays that way! Check out the look Jessica created here. I am in love with it!

Thanks for stopping by!