The vintage polish that I’m sharing with you today, is one that I don’t have much information about. When I spotted this polish at one of my dusties, I grilled the owner about how old it was but he couldn’t tell me anything besides: “It’s old.” He actually tried to dissuade me from buying it because it looked pretty separated and gross, but I knew some thinner would bring it back to life. One thing he was able to tell me is that the brand, American Classic, is the brand that makes our favorite glitter tamer Gelous. I’m not 100% sure if this is accurate but the logo looks the same so I am inclined to believe him. I’ve tried to search out more information online but sadly came up empty-handed. The bottle looks old, there is no information online and the polish stinks like the old chemical-ladden polishes we all loved so I’m going to say that this polish is just OLD. Let me show you my swatches of this oldie. 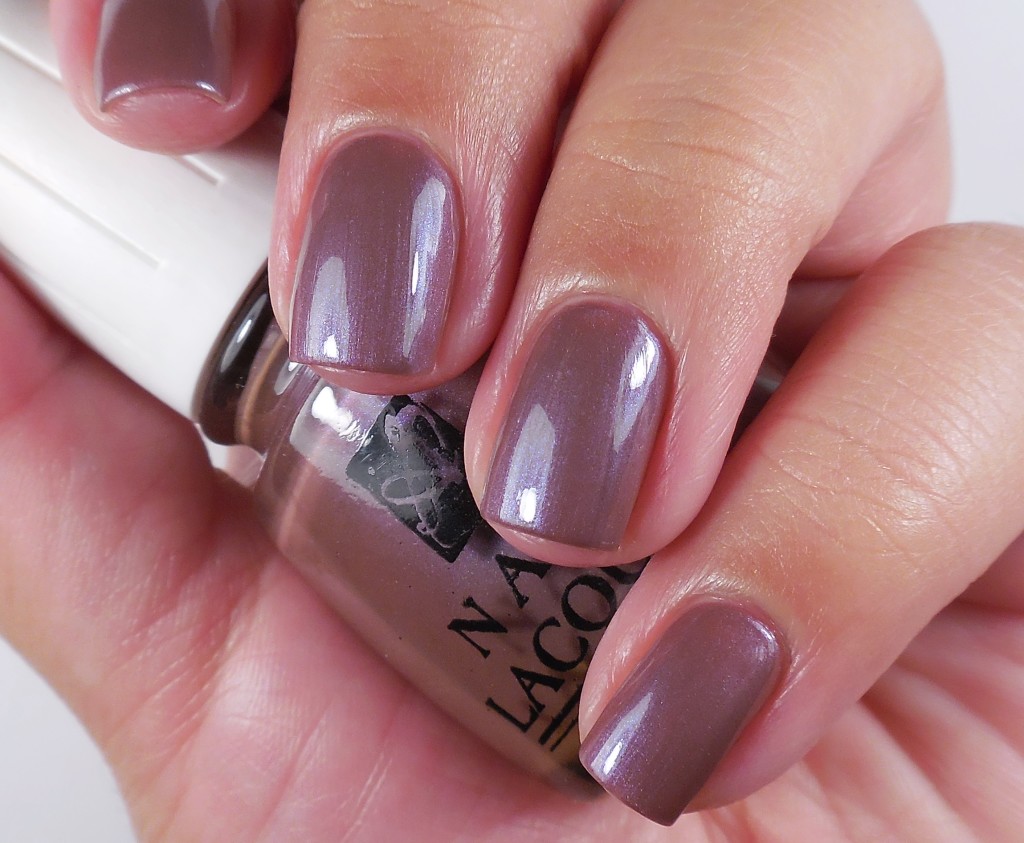 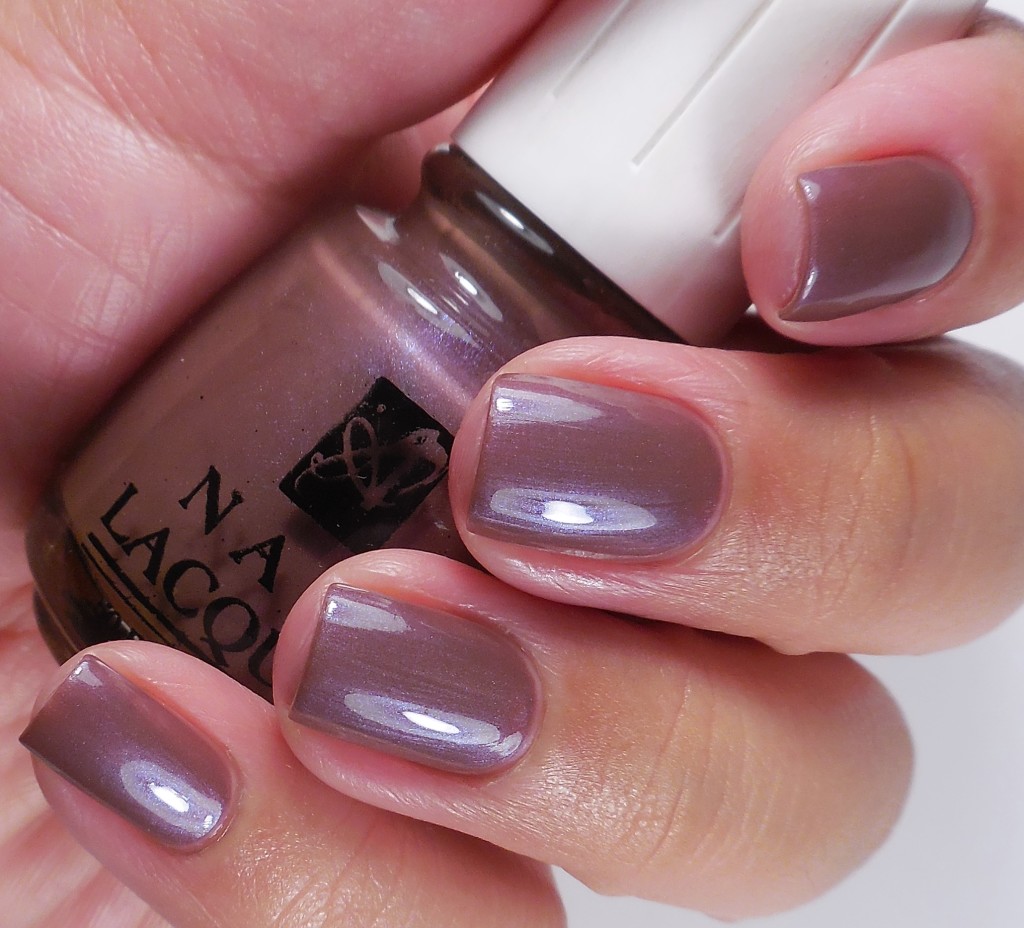 While you may think American Classic Dusty Mauve is a “mom” color, I defy your assessment. It’s such a strange mauve color with purple/blue shimmer that is just so unique. I think that when this polish first came out, it was super unique. My lighting makes it look a tad frosty, but it’s actually very shimmery. The formula on this was rather thin so I had to apply 4 thin coats to build up the color.

I really like this color to be honest. I actually grabbed a bunch of polishes from this same line so I’ll be sharing those in future Vintage Polish Friday posts. So what do you think about this polish? I’m curious to hear your thoughts and most importantly: if you have any information about this polish line…please share!!! Thanks so much for stopping by today, and I will talk to you soon.

Never in a million years did I think I would actually like this color, but I do because it’s so rich and pretty! If you’ve read my previous posts about American Classic, you know that I am still trying to figure out where this phantom brand comes from. I haven’t given up, but I’ve just been too preoccupied with other things to really put in the time into making phone calls and such. Oh well…I choose to just enjoy the nail polish for now and worry about its origins later. The brush for this bottle was way wonky. Actually, it was the plastic stick that hold the brush that was deformed and somewhat bent. It didn’t really interfere with the application of the polish so it’s not a big deal.

Does this qualify as a frost? Normally I am not a big fan of frost finishes and rarely purchase them, but this one looked so different from anything else I own that I couldn’t resist. It almost makes me think of molten magma…I said almost, okay?

Here I used plate BM 313 with the black special polish. I have been a little annoyed lately because I have been messing up my stamping a lot. I don’t get it! I hate it when it gets all smudged. Since my nails aren’t too curved, I’m going to stop rolling the stamper and just stamp the crap out of my nail by just pressing down. Hopefully that works better.
It was so hot today. Ugh! My brother and I went to Red Robin for dinner (Yum!) and I got a grilled chicken caesar salad wrap…it was so good. I hadn’t had a wrap in a long time. and it really hit the spot.

The giveaway is ending in less than an hour…I can’t wait to see who will win. 🙂

Today I have another oldie for you from American Classic. I am still actively trying to hunt down more information about this company and this phantom line of nail polishes. I might just have to go and talk to my nail polish guy again since he told me some background info on the the founder of the company. I was looking at the ingredient section on the back and it is definitely not Big 3-Free…not that it’s a big surprise considering how old the bottle looks.

This color is called Kissin Cousin. What is a “kissin cousin” anyway? I mean, it sounds a little incestuous to me.  The formula on this was very sheer but also very buildable. I love this soft color because it just looks so delicate and bright.

Will you stop with the glitter already!? Here is Kissin Cousin with a coat of Servin’ Up Sparkle. I also applied a mattifier  to change the look of the glitter and polish.

Have you ever come across these American Classic nail polishes? Please let me k now if you have any information about them; I’d love to know how old these are! Thanks for visiting today and I hope that you have a lovely weekend.

I love this video. I think it’s my second favorite kid video on youtube with Charlie Bit My Finger being #1

I was asking myself if I really bought this much nail polish today. I look at it and I am still wondering what possesses me to go on these nail polish buying binges. It’s like a high. Is anyone else understanding this or am I just nuts?

I picked up the whole Gelato Mio collection from Jessica Cosmetics. I’ve gotta admit that the main reason why I got these is because I am dying to go back to Italy. Some of my fondest memories of Italy are food related–gelato being a huge part of it. The last time I was in Italy, way back in 2003, V. and I went to Rome and Florence. Despite how cold it was, we were still dedicated gelato eaters the whole time. Ahhh! Also, I have the funniest picture of D. and I during our first trip to Italy. We went out for a really awesome dinner and we had probably the most pivotal conversation in our 15 year friendship. We also proceeded to get plastered on red wine and then wandered around the city drunk and crazy trying to find a gelato place that was open. Once we did, we bought some and headed back to the hotel. The next morning, D. was asking me what the hell we had done the previous night because his jacket was coated with something. We never figured it out until I developed the pictures and we got a picture of him drunk, eating gelato while it was melting down the cone and down his arm all over his jacket. LOL

One of my dusties had a crapload of these American Classic nail polishes. I wanted to get a bunch of them because the one I previously tried was awesome. I still don’t have much info about this nail polish line, but I got to talking with the owner of the nail polish store and he told me that the guy who started this company also started China Glaze. Huh? He was telling me how he had designed the bottle and stuff. When you look at these, they do look exactly like CG bottles except for the ridges on the cap. How cool. Sally Beauty Supply gave me a contact # for American Classic (who make Gelous) so I’m going to call them and see if they can give me any info about this. I’d love to know how old these are.

Ahhh…Kleancolor. These smell like the vas deferens of a platypus. The smell is beyond disgusting so I don’t know if I’ll be able to deal with them. These are all glitters!!!! I decided to get them because they are dirt cheap and I will never pay a lot for any glitter.

These are just some assorted goodies from China Glaze (yay for super old polishes!!!), Nubar, Essie and Dare To Wear.

And lastly, I got some more special Konad polishes for stamping and some nail art stuff.

I need to cut the crap and stop being such a nail polish hoarder. I only have 20 nails…why do I need so much? Well, for now, nail polish makes me happy and I really need a little happiness when I’m usually feeling so rotten. I hate feeling like I’m just a shopaholic, but I guess it could be worse.

Today I have another installment of Polishes From The Mesozoic Era. This is another one of those polishes that I picked up a few weeks ago at my favorite dusty. As you may be able to tell in the pictures below, some of the lettering on the bottle has rubbed off, and I didn’t really recognize the brand. I was drawn in by the steel blue color and the pink shimmer. The label at the bottom told me that this color is called Dramatic Blue by American Classic. It also mentioned that it came from the Vogue Collection. Eh? I’ve never heard of American Classic so when I got home I looked it up. It appears that American Classic is the company that makes Gelous. I could not find any information about actual nail polish colors because it seems that they only have a range of base/top coats and treatments. How old is this polish?!?! I’m super curious and will continue to search until I find my answer.

I don’t know if it’s just me, but I find this polish very unique! I have no idea how old it is, but I wasn’t surprised that the consistency seemed a little thick. I didn’t shake it enough and maybe a couple of drops of thinner would help it. I am going to look through the rest of the colors the next time I go to my dusty. Can you think of any other similar colors? Do you know anything about this line of nail polishes? If you have any information, please leave me a note.

And lastly, after my Aroma Café post from last night, I had been craving Starbucks. How can coffee make me so happy?

Stay classy and when all else fails, paint your nails. (This could be my new tagline! lol)